Thanks to my persistent husband I got up and walked before 7:30 both Saturday and Sunday. I’m not really sure that Sunday counted because we went and got biscuits afterwards but I did do as my husband requested.

Mollie had to go to church an hour before we did and as soon as she was out the door Nick said “It’s time we had that talk.” I got the normal spanko feeling. For those of you who don’t know what that means, it’s basically that we spend about 99% of our waking hours (when we aren’t being actively spanked) wondering when the next one is coming, wishing the next one was coming, working on ways we can insure the next one is coming and being mad because our spanker seems to have forgotten that a thing such as spanking exist in the world. But that other 1% of the time, that time when we know for sure it’s coming – then we are wondering why we ever mentioned spanking to him in the first place, deciding we have completely changed our minds about the necessity of the upcoming spanking , and scouting for the quickest exit.

Although those 1% thoughts were circling in my head I dutifully followed Nick back to the bedroom where he was opening the toy box. Bending me over the bed he began a pretty good warm-up with his hand. Firm, but not bad at all. As he began to talk however, it got a little harder. His two themes were:

1. I wasn’t doing anything on the healthy lifestyle goals. (Guilty, I admit)

2. I was ‘bad mouthing’ him out here as not doing his part and not being consistent. (I’m guilty of that too, but it’s still the truth!)

for him to use and after each swat I was to ask for another if I thought I needed one. He said “Let’s just see how serious you are about this.” Well the choice was a no brainer – the dogging bat for sure. He started off medium and I continued to ask for more. Then they got hard. I was taking longer between swats to ask for another. His aim was dead on too – right on the sit spot where legs and bottom meet. He took his time between each one, due to my hesitation, but toward the end they were full force! The man was making an impression.

Finally I couldn’t make myself ask for another, I was on fire. It was then that he picked up the OCW – thick, firm leather and lay about five more on my sit spot. Holding my position was 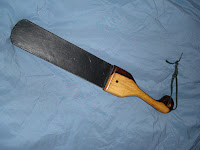 nearly impossible, but I did it. I was burnt up! I have no complaints about him not being serious! I was rubbing like crazy. I was most grateful. It really hurt; it’s been a long time since it really hurt. There have been lots of spankings, but really none in the past year that I felt after I got up, none that I could remember when I sat even a few minutes later. This one I could feel and I felt loved.

I got an email from him later with some request for this week. I’m working on them. I emailed him today too. I hope this wasn’t a onetime deal. It’s not that I want a spanking like that every day but – I have to say I sure felt better afterwards. I wish there were more little spankings when we don’t have time for something big. Nick leaves at the crack of dawn – I’m still in bed, asleep and cozy. I sure wish he would flip the covers back and land a few sharp cracks against my sleeping butt (that incense holder worked just fine the other morning.) So I’m making a deal with myself, any morning he does that I’ll exercise (walk, do an exercise video, swim, or go to the gym) before I pick up the computer. But I’m not going to tell him to read this. If he is really interested in what his wife thinks, wants, needs or anything else about her – well he knows where my blog is. For those of you who know Nick’s email address, NO FAIR telling him to come here. I really want to see if he is interested enough. I’ll let you know.
Posted by PK at 2:00 AM