I’m back. Had a great trip. Ate waaaayyyyyyy too much. Eva is one of the very best cooks in the whole world! We had steak, mashed potatoes and gravy, corn on the cob, green beans, bread, and fruit one night. 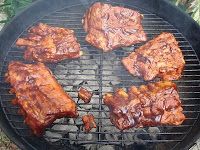 And ribs, baked beans, zucchini paddies, corn on the cob, green beans, bread and fruit the next night. And she had made a lemon cake, banana bread and chocolate chip zucchini bread that we snacked on continuously. Such a great place to go when you are trying to lose weight. But it was totally worth it!!

It was a peaceful trip. As Eva pointed out the only real excitement was that I slept with her husband Adam but heck, what are friends for. Of course as deep as I sleep during my Sunday afternoon naps she could have run a whole foot ball team through the house and said I slept with all of them too. Who knows what happened.

I’ve know Eva for 4 years now. And like most of us over a 4 year stretch TTWD comes and goes a little. She said they were not big into it right now and I had no reason to not to believe her until the following implement was brought out – right in front of Mollie I might add. It’s called the ‘Zap Master’, hmmmmm… and when you hold down the button and swat something there is a little electrical charge, double Hmmmmmm… 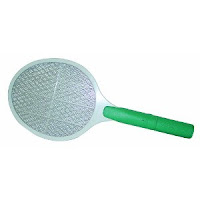 Now I’m sure that they are both being truthful that living alone with total privacy all they ever do with it is sit around and swat ‘bugs’. Whatever, just wish I had one.