Before I get on with Nick’s birthday celebration I want to point out that Eva has fired up Nothing Random again. Eve was my first friend out here went I started blogging. I left a comment on her second or third post, she emailed and since that time we haven’t missed more than three or four days emailing since. I hope she gets back into blogging because it was always fun having her out here. I’m like gum on her shoe, she’s pretty much stuck with me whether she’s blogging or not, but if you get the chance go by for a read. I’ve always found Eva very interesting.

Back to the celebration…

in bed Friday night. He had his hands all over me. I’m mid 50’s and chubby, it’s a compliment that my husband loves touching me! The next morning Nick and I got Mollie off on her trip. We each had a few things to take care of and I was emailing Mthc that we were getting ready to enjoy our ‘empty nest’. Having not had the chance to experience this too much she teasingly wrote back “What’s that?” She said she liked my definition which was “It’s where your husband can grab your boobs or ass any time he likes and spankings can happen whenever!”

Mid-morning Nick walked into the living room wearing his ‘let’s party’ boxers and led me to the bedroom. Sitting me on the bed he said ‘Let’s see what all we need to take care of today. I believe you have a birthday spanking to take for someone and I need to know how much your weigh is up from two weeks ago. You’ll notice I didn’t ask you if you had lost any.” This was when we went to Eva’s and she force fed me! But in those two weeks I was only up a little over a pound.

“So,” Nick went on “we’ll need to take care of that too.” NOTE – for any new comers, Nick does not spank me for gaining weight. He does spank me (at my request) when I blow off exercise or go wild on my eating (evidently he’s not spanking long enough or hard enough about this though.) And since Eva did all the cooking on our vacation perhaps she should have gotten the swats, but I digress.

Nick continued “But there is one more thing we need to take care of. You know it’s good for your health and it’s been a while so I think you need an enema first.” Hmmmm… Despite what I thought when I first began blogging I am not, nor will I ever be, submissive. It’s not really in me and Nick doesn’t want me that way. But that doesn’t mean I don’t enjoy the feeling of being submissive at times. Whenever this particular subject comes up I feel submissive and like things are out of my control and that’s a good feeling. An answer of “Yes, sir” is really all that is necessary.

So once that was done and we had showered together Nick began assembling weapons, I mean implements, for his birthday spanking. I cozied down on the bed and he began a good warm up with the light leather paddle once the birthday spanking began he would change implements every 5 swats and as old as Nick is this took us through a lot of toys!! I was enjoying the warm glow I was receiving until the cane came out. I usually try to put that somewhere where it won’t be that handy but he seems to find it with little trouble.

At the first swat with it I snapped “Where did that come from?”

I could hear the smile in Nick’s voice as he answered “England I believe. Ronnie sent it, right?”

So he continued on until he finished up that wonderful birthday spanking with his belt that I love so much. Before he could start on anything else I ask if he would be willing to wait on the weight spanking until later in the day. He seemed willing to move right on into the various sex events of the day. Tell me do people really get depressed about the empty nest??

We were meeting friends for supper and we had decided to head out early to do a little shopping. But Nick hadn’t forgotten I had another spanking coming. He used the OCW – seen in my masthead, the evil hair brush and that *$!@^& cane again!! But I was glad he did it. Nick is wonderful about fun and erotic spankings that lead to sex but he often forgets that I also need spanking for focusing on weight and other things I need to be doing. Well he remembered this time! It was wonderful to head out on our shopping expedition with a burning, sore behind. Now that’s love.

Our shopping trip included some adult toy shopping. I am happy to say we have several things nearly worn out or broken and we just felt like looking around. We have a small to medium size store in the next town. I’m always a little fearful of being seen (once a friend of LJ’s was working there when I popped in!) We looked around; there were so many fun things. But we only got a few things, pictured here. 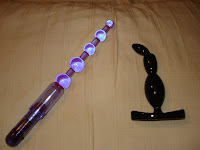 Sunday afternoon we played some more – with the new toys – and just totally enjoyed our privacy and time together. Maybe some people our age dread having another birthday. I sure didn’t hear any complainants from Nick!
Posted by PK at 12:05 AM