How to celebrate a birthday! 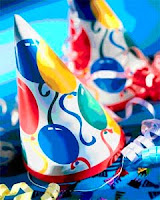 How do you celebrate a spanko’s vanilla husband’s birthday? Hmmmm… We had just gotten back from our trip and Nick had to go back to work that day. Nick doesn’t need ‘stuff’ to fill up our house any more so I figured I could be a little more creative with his gift.

He came home from work Wednesday tired and hot (it’s been in the 90’s and there is no A/C there). I learned even before we were married that everyone needs a few minutes to relax when they get home from work so I let him come in and settle but I told him he did have some email he might want to check. Basically I just offered him an afternoon of anything he would like. His biggest decision was whether to lie there with his eyes opened or closed.

He put himself in my hands and I started with a full body massage. I think you could say he was relaxed. Now I know it’s the job of the spanko in the family to take any and all birthday spankings but Nick was just too relax to give one so I thought what the heck maybe I could give one. Nick doesn’t mind the occasional swat I give him playfully so I began his birthday spanking – just light swats, until I got to the last ten. Nick often lets me give him a swat with a new implement so he

will know how it feels. Whether it needs to be used lightly or whether you can go all out. For the last ten I got my ten favorite implements and gave him a good swat with each. He might have wanted to object but I just had him too mellow to care. Except to murmur, “Remember, you’ll be getting my birthday spanking on Saturday. Pay back’s hell.” LOL! I wasn’t worried.

We ended that part of his birthday celebration with some oral that seemed to wake the man right up. According to Nick it was one of the best birthday gifts he had ever received. Since Mollie was headed to the beach Saturday morning we decided to continue the celebration then. More to come…
Posted by PK at 12:05 AM