I'm all by myself this weekend. Nick is off golfing with friends. Don't know what I'll do, read and write some I would imagine. That sure is what I enjoy doing. I'm happy to be able to post Annie third part of this story. I think it's been a great story and I keep wondering if there might be more to come. I'm not pestering Annie, LOL! I just want her to know I'm more than willing to post anything she wants to send me! If you've gotten behind you can read part one here, and part two here. And now here is part three…

Tyler was a happy man. A beautiful wife, a comfortable home, a lucrative and interesting career, and enough money in the bank to ride out any unexpected crises. Racing toward home at the end of a two-week sales trip Dan passed the time thinking over the past few months, and looking forward to a long weekend with Kerry. The last time he had arrived home early was the start of a whole new lifestyle for them. Remembering how uncomfortable he had felt when he discovered his wife's little secret he had to laugh out loud. No one could ever have convinced him that tipping her over for a thorough spanking was the key to saving their marriage but it certainly had. Not only were they closer than ever, but it offered an intimate solution that cleared the air, let them both know just what to expect, and their sex life was hotter than ever. Just thinking about her bottom growing pink with his hand prints caused an immediate tightening in his groin. Two weeks was a long time to be away, too long. 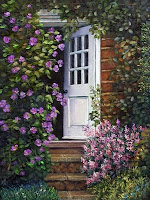 Dan parked his car and hurried to the house, leaving his luggage for later. Usually the sound of his car brought Kerry to the door to greet him, but she was nowhere in sight. Thinking she may be in the back yard he walked around the house to find music playing on the patio, the backdoor open, and no one in sight.

Growing worried he raced into the house calling her name. It wasn't until he reached the second floor that the sound of water running led him to the master bath. There she was, singing to herself, totally oblivious to his presence. He waited in the doorway for her to see him until his temper boiled over. Shouting her name he flung open the shower door, grabbed her by the arm and drug her into the bedroom-dripping wet.

"What are you doing home?"

"Never mind that, what are you doing home, alone, with the doors unlocked? Anyone could just waltz right in. I thought we agreed, the doors stay closed and locked when you are home alone."

As he talked, gritting his words through clenched jaw, he tossed his wet and slippery wife over the rail at the end of the bed and laid into her backside with his hand. The extra sting of wet skin soon had her legs dancing as she pleaded with him to stop. Afraid of punishing when he was scared and angry Dan soon jerked her to her feet and marched her to the corner.

"You stay right there until I come back, and no rubbing."

Hopping from one foot to the other in a vain attempt to cool her bottom, Kerry kept her nose pointed straight into the corner. The last time he made her do corner time she was sure he had gone downstairs so she started to rub and turn around just as she caught sight of him watching from the hall. She wouldn't be making that mistake again. No matter how bad it might hurt, not rubbing was way easier than starting all over. Sniffing, she did indulge in a softly whispered diatribe about brutish husbands who are never where they are supposed to be, but made sure her words could not carry to the wrong ears. He already had his shorts in a twist, no need to make matters worse.

Dan went to the kitchen and made himself a drink. She had the audacity to act as if he was being unreasonable. The whole neighborhood knew he traveled, anyone could walk right in. Determined to teach her a lesson she wouldn't soon forget he left her waiting for over 30 minutes while he calmed down and then gathered a few items he would be needing. The old wooden spoon with the flat handle left her screeching whenever he used it on her thighs and this time he wanted to make sure she thought of him every time she sat down for the next day or so. 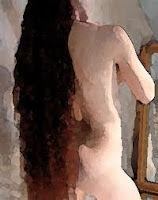 Climbing the stairs he was struck by how beautiful she looked, waiting for him in the corner, his hand prints still glowing on her creamy skin, damp hair tumbling down her back. Wishing he could just take her to bed and forget the whole thing reminded him of something one of the husbands had said on one of the lists, that this lifestyle may be rewarding, but it is damn hard work.

"What if it wasn't me that walked in on you, Kerry? What if some stranger just wandered in? These are the things that drive me crazy and keep me awake at night when I am traveling. You just don't stop to think. Get into position on the bed. I plan to help you remember to lock the door for a long time."

Kerry scurried to the bed and slid under the railing. She hated being punished in this position, it left her spread open and wedged too tightly to wiggle. Plus it gave him access to parts that he couldn't reach when she was over his lap.

"Why are you being punished Kerry?"

"Because you're mad at me."

"Why are you being punished?"

"Because I didn't lock the door."

"Speak up, Kerry, I want to hear your answer."

"I said, because I didn't lock the door." She shouted, hating the way he made her participate.

"Do you deserve a punishment?"

"Back to mumbling again. Do you deserve to be punished?"

"YES! Will you just get it over with, please, I don't have all day."

"I can see that this is going to take some time. Let's start over, shall we?"

Pulling on her hips he made certain she was wedged tightly in place. Seeing his hand prints from this position showed clearly how ineffective the OTK position really was. The lily-white skin stretched tightly from the bottom of her buttocks to the back of her knees was very conducive to lesson learning. How lucky he was to have discovered this by accident, and the husbands he had shared this with were all reporting amazing results. Even for wives who had grown immune to regular paddling.

Making sure her legs were spread to his satisfaction, he began applying the spoon in rapid strokes to her bottom, covering his hand prints with a deeper mottled red. Starting down the backs of her thighs had her squealing before he had finished one leg.

"Why do you deserve to be punished young lady?"

"Because I broke a rule, I'm sorry, I won't do it again, that's enough, please stop."

"I think we have a ways to go before I can be certain you will remember to lock the door every time."

Starting at the top of her cleft he methodically placed five swats to the same spot before moving down her cheek and repeating. Working slowly he covered every inch to one knee, then started the other side. When he had her undivided attention, he turned the spoon around, grasping the broad spatula-like end he had been using in his hand. The narrow, flat handle was like a ruler and fit perfectly to stripe the inside of her thighs and the crease at the juncture of her bottom and legs. This was pure punishment and had her sobbing incoherently with the first strike. Steeling himself to ignore her misery he made sure she would think of this every time she moved for the rest of the day. Finishing up with several extra hard cracks across her sit spot he tossed the spoon onto the bed but left her in position. With a hard punishment her skin seemed to writhe in memory even after he stopped. He knew she was burning up, and desperately wanted him to comfort her, but that was the difference between true punishment and maintenance, or pleasure spanking. This was meant to teach a lesson that would be remembered long after the burn subsided. Gently, he eased her out from under the rail and helped her to the corner. Placing her hands on her head he guided her nose into position and took a seat. She knew better than to move her feet, but the need to soothe herself had her shifting her weight from foot to foot, vainly trying to ease her discomfort.

Quietly he eased out of the room and went to get a cool cloth and a glass of tea. He wanted everything ready for her. Once the tears stopped and he let her out of the corner she desperately needed to reconnect. It amazed him that she was so fierce in her arousal after even the most brutal punishment. Sighing, he wondered if he would ever understand this fey creature he married, and headed upstairs to make love to his wife.

Thank you Annie! That was great and we'd be happy to hear more about this couple any time you feel like writing it. I hope you'll all come back next week - thanks to another great writer we have a brand new Fantasy Friday coming up.


And if you are out there writing and you're willing to share your story please send it to elisspeaks@yahoo.com