We had another wonderful Saturday afternoon. Sometimes I can’t believe we are getting all this time to ourselves and Mollie’s getting paid to boot. I feel like we should be paying the fo 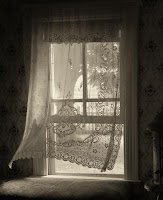 lks she is babysitting for.

The weather this weekend has been fabulous! I love being able to sleep with the window opened and at we are waking up its cool enough to snuggle. We enjoyed a little preliminary as we woke up Saturday morning but decided to wait until Mollie was out of the house for the main event.

Not long after she left Nick invited me to join him in the shower. And then it was off to the playroom or bedroom – whatever you want to call it. Nick decided to give me a shave and I’ll admit I like it when he keeps me clean shaven. He started this shortly after I came out to him and I like it as a tangible sign of the very real change in our marriage.

After the shave Nick came up with a small twist in our play time. We each got 5 minutes to be catered to, after 5 minutes we would switch. Sometimes it was maddening! I mean things were feeling so good and then my turn would be over. So I did my best to torment him just to the edge and then it was my turn again! It really was a lot of fun. I even got to show him how a good warm up feels!

Soon enough it became a little hard to tell whose turn it was – everything was feeling pretty good. At one point Nick had me stand with my hands on the bed and used the belt. I swear I do love the feel of that thing!! Many toys came into play by the time we were finished it was almost like we were trying more bondage – we were so tangled in cords and toys we could barely move. Not such a bad problem really!

encounters with skinned elbows. Certainly not too high a price to pay for such a good afternoon but occasionally Mollie will notice my slight abrasions and ask about them. I always act surprised that they are there and feint complete ignorance of how it might have happened. It’s no problem now but I did have a chuckle – can’t you just picture Mollie in the future, happily married to a man as wonderful as her dad and after a fun afternoon discovering she has the same tiny scrapes. I picture her making up a story for my grandchildren and suddenly remembering… I can see her saying to herself ‘Could that be how mom got her elbows scrapped? Can’t be – I know Mom and Dad never did that!!”
Posted by PK at 12:01 AM