We'll work on it

I am sitting here (Saturday night) stuffed to the gills. So much for the diet today. We went out with friends tonight and I feel like I can barely waddle. We had a coupon for a free blooming onion, then I had their good bread and then ribs and mashed potatoes. I guess I need to hit the gym hard Monday!

I love weekends. Nick and I slept late and it felt so good just to lay there and cuddle. Nick mentioned it too. We went so many years not touching – really hardly ever. Now we cuddle, turn in unison most of the night to spoon, we rub and touch and just enjoy being close. We wasted so much time. But that’s in the past now.

is just one thing we need to work on. It’s not a big deal but I know we have room to improve. I’ve mentioned it before but we still need work. Nick really wants me to initiate sex more often and I really always intend to but I know I don’t initiate as often as he would like. As for me I want him to spank more often. Now it’s not like we’re holding out on one another – not like th 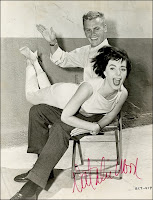 at at all. But for whatever reason my make-up is such that the only time I really feel sexy is when I am spanked often...when we don’t have the time or privacy to get in some spanking I just don’t feel desirable or sexy... and when I don’t feel sexy I don’t think about initiating sex... and then Nick seem to spank less... and on and on, see how it goes? It’s not really a problem, just a hitch but I wish we could get into a more regular routine. I know if we both put in just a little more effort we would both like the results.

It’s really not a bad problem to have. So many people our age have totally lost interested in each other and just don’t care. I know we’re close now and I really don’t see that going away. I think we’re both happy and I think we are both willing to try to do things that will make us even happier. We’re at a good place after 26 years of marriage. We’re having a great time and looking forward to even better times to come.
Posted by PK at 11:46 PM