Colonoscopy - the inside story

No good spanking story today but very important post none the less. No one wants to go for their colonoscopy. I put it off for about 5 years. But one thing I can tell you for sure now is that dreading it was much worse than the actual test. So for those of you putting it off I want to tell you it wasn’t bad at all. I only had one real problem and I know now how I could have made that much better. So here is what to expect.

I had to be on a liquid diet for a day and a half. I had a delicious meal at my MIL’s on Sunday and then I could only have clear liquids, apple juice, white grape, broths, jello, black coffee or tea and soft drinks, diet or regular (nothing with red coloring). Actually it ended up that I didn’t have anything to eat for about 48 hours but I really didn’t feel hungry. I guess the fluids filled me up pretty well.

Now of course everyone dreads the prep more than anything but it wasn’t as bad as I had feared. I had to talk two laxative pills to start, then I had to mix the powder stuff in 64 oz of Crystal Lite or Gaterade. I was most dreading the taste of drinking that much yuck. But I can tell you the powder did not taste at all!! All I tasted was the Crystal lite and I found a white grape flavor that was really good. I started drinking this at 5:30 and had to ha 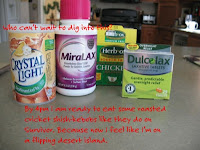 ve it finished by 7:30. That’s a glass full about ever 15 to 20 minutes. I was expecting to spend hours on the pot – that didn’t happen. When I needed to go I went then I came back and watched TV and drank more of the mixture.

The whole process seemed pretty steady. There was no cramping, no pain. But I did run into one bad time. I got nauseated. I hate and despise that feeling and I also despise throwing up!! But that was the only bad time really. Now if you do this I think I know how you can avoid this problem. Even though they tell you to drink all that mixture in two hours, don’t push it. You just can’t take that much liquid at once. Maybe start your prep a little earlier than they say and take a little longer with the mixture. The results are going to be the same and you can skip the nausea part.

I did get up a few times during the night to go but still there was no cramping or hurting at all, just a little lack of sleep. By the next morning I felt normal. Still wasn’t very hungry but ready to get it all over with. Nick and I arrived at the office at 12:15. I put on a gown, they put in an IV and I rested quietly until my turn. They rolled me into the procedure room and asked me to lie on my left side and breathe normally.

Two seconds later it seemed I could hear the doctor telling Nick that everything went great. He found two small polyps which is fairly normal at my age. He removed them and they w 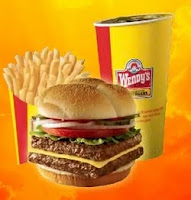 ill be tested but the doctor thought everything was perfectly normal. Nick helped me dress and went for the car and with only slightly wobbly legs the nurse led me to the door and we were homeward bound before 2:30. That is after a stop at Wendy’s for a delicious hamburger and fries.

I've written all this to encourage those of you that should have this test but you’ve been putting it off to have it. It wasn’t awful at all. Had I avoided that period of nausea I would have said the whole thing was a piece of cake. You have to know it pales in comparison to the realization of colon cancer and everything surrounding that. As my doctor said, even though not every polyp becomes cancer, all colon cancer begins as a small polyp. This was so much simpler than I thought it would be. And I don’t even want to think of having let those two little polyps develop into something with serious, possibly deadly results. I swear this isn’t bad, get it done folks!
Posted by PK at 12:05 AM