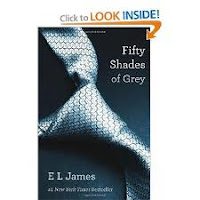 I watched 20/20 Friday night to see the interview with E.L. James, the author of 50 Shades of Grey.  I found out a lot from that interview.  She’s one of us – maybe not a spanko, certainly not born as one of us, but she shares the same fantasies.  She was obviously curious about TTWD, and the ideas involved in BDSM, the desire to be controlled and dominated.  She was curious and researched on the internet.  Who knows but that she lurked on some of our sites?  She then threw these new ideas of her to her husband and there was a great improvement to their sex life.  Come on; does any of this sound familiar? I think this happened to a lot of us. It’s pretty much exactly what happened with Nick and me six year ago.

Then she wrote her fantasies into a book, three books to be exact.  Now I’m not saying that her writing abilities will push Hemingway to the back shelf or anything, but she did what a lot of us out here are doing, she wrote a fantasy sex story that she liked.  She self published it as an ebook and enough people liked it, enough people thought it was a good read, that word of mouth – NO formal publicity, has the three books as the top three books on the New York Times best seller list.  I’d have to say that’s impressive by anyone’s standards.

I’m for anything that will get our ‘message’ out to the masses.  To let people that it’s not really strange or kinky to want to be controlled or dominated, at least some of the time.  It not anti-feminist, it’s our choice, as independent, thinking women.  We know what we want/need and we’ve asked for this in our relationships.

And one last thing, just proving my point, on the 20/20 show, they showed a sexy picture of a woman bound in chains, they had a brief scene of some women blindfolded, two clips of women spanking other women and one short clip of a woman spanking a man – not one representation of a man spanking a woman.  That’s how I know they’ll screw up the movie, they won’t show our reality.  And if they want to include all the sex that’s in the book I assume that they’ll be going for a XX-rating.  I say use your movie and pop corn money to buy the book.
Posted by PK at 4:00 PM