Thank to everyone who is reading over at Cassie’s. There should be a post up about every other day for a while. And remember, if you’ve linked her and I haven’t linked you, let me know and I’ll get on it right away.

I haven’t had much to say about LJ lately. This is my son, for those who haven't been reading here long. That is one busy boy! (Okay, man, I guess) He has two jobs, one at the coffee house and one at a NYC park. As it’s worked out he has to work every single day in April. Usually he has at least one day a week off, but at the park he is filling in for his boss who is out of the country adopting a baby. In addition to working he is part of a new theater company that he and his friends are starting. They managed to raise the money for their first production. Things were put on hold when they didn’t get the approval to do the original play they wanted to do, but it’s only a delay. It’s coming. He is also auditioning for any parts he feels he has a change for. And he is making contacts, lots of contacts!

Did any of you see this picture in People Magazine this past week? Of course that hot guy is none other than Josh Lucas, star of Sweet Home Alabama and currently starting in The Firm. But that’s not the one in this picture that impresses me the most. It’s his lovely new bride, Jessica, LJ’s best friend for the past 10 years. Jess has been a frequent guest in our home over the years. When, for LJ’s graduation, I we gave him a trip to Disney World for he and a friend, he took Jess. 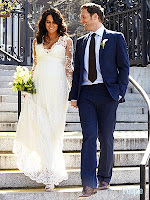 Jess and Josh got married in Central Park on St. Patrick’s Day. There were only about 12 people at the actual wedding. LJ was one of them. I got wedding pictures on my phone way before the celebrate magazines did. This lovely couple is expecting a baby in June and since Josh is filming The Firm in Canada, LJ has gotten to go with Jess to many of her OB-Gyn visits and gets to see the little one on the sonogram. He is so excited, he feels like he is going to be an uncle. This is the first of his friends to have a baby so it’s really special.

I was worried about my boy moving to the big city, but he is really, really happy. He and Collin are working on painting their apartment and making it a real home. They have been together for more than seven years now and they’re still happy with one another. When I began this blog I was so upset about him heading off to college for the first time. I survived and he flourished. Hope you don’t mind a little bragging every now and then. I’ll probably have one about Mollie before long!