We all went on our adventure and we're home safe and sound. The cruise was wonderful! The food was incredible and constant. We are now back to living like barbarians – tonight I had to put my own napkin in my lap, there was no breakfast nor lunch buffet set out and I have a sneaky suspicion that there will not be a towel animal on my freshly turned back bed tonight. I guess its back to real life. 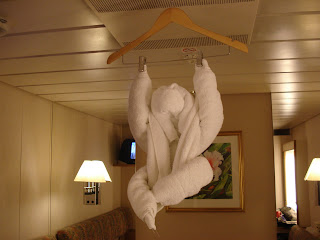 I really enjoyed having the whole family on the trip. However, even though the kids are mostly grown, I found it very hard going back and forth from mom to wife. One problem was the lack of cell phones. Talk about being addicted. I know I am, and so was everyone else. I use my phone as a watch, for one thing, as well as keeping up with everyone. We left them off because I was worried that we would be charged oversea rates. So although I never really worried about the kids I was always wondering where they were and when we would meet up.

We spent a little while in the casino – as one of the on board comedians said “The casino will be opened all night to accept your donations.” You had to be 18 to go in. Mollie was thrilled when one of the workers came and asked to see LJ’s ID and not hers. He’s 23 and she’s only 18. One woman won a little over $500 in the quarter machines but my goal was seeing how slowly I could lose $10, one quarter at a time. It took a while but eventually it was all gone. Guess I’m not the gambling type. 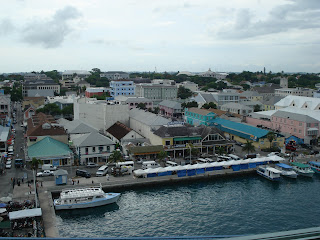 We were in Nassau to do a little shopping. Mostly it was jewelry, diamonds. I don’t wear much jewelry so I was ready to go back to the ship after only a short time – there was so much to do on board. Mollie and her friend Shay wanted to stay a while longer. My dilemma – do I let two beautiful 18 year-old girls run around alone in a foreign country. Hmmmm… as I tried to make up my mind about this Mollie stepped in to reassure me. She said “Mom, don’t worry. We’ve already met a couple of the local guys. One’s a tattoo artist and the other has his own boat. They’ve promised to give us a ride on the boat, all the tattoos we want and all the free liquor we can drink. We’ll be fine.” Since she put it that way… I let them stay and thankfully they returned a short time later in one piece – sober and no tattoos.

Here is the only picture I’ve ever put up on this site of all the kids. I really do like this picture and it shows how they went through the whole cruise - happy and on the move! They are from left to right - 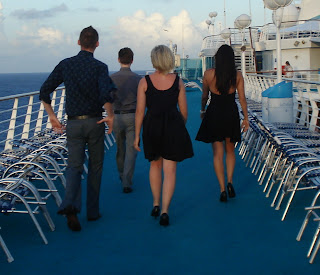 Now I said I had a bit of trouble not being just a mom on this trip, but I did manage some of the time. There was some sex and spanking to tell about too. That’ll be in the next post.
Posted by PK at 11:29 PM