Did someone say something about rules?

There has been a lot of talk out here in blogland about rules lately. Many of us want them; others think they have too many rules already. I tried my best to give Nick power when we first began this. He has no idea how much power I was trying to give him. He didn’t want it. We’d been married over 20 years and he didn’t want to be the boss. He liked our partnership. Hmmm… I couldn’t very well object to that but it didn’t fit in with my lifelong fantasy. As the years have gone by I have to grudgingly admit that he was probably right. I just wouldn’t have worked for us.

I’ve read with interest some of the different rules my friends here have. Most just would not apply to us. Nick and I are never disrespectful to each other. We agree on the kids and how we spend our money. We both work and we share the household chores (with him doing the lions share). There are some rules I would not be comfortable with – limited computer time or a bed time that was not reasonable to me.

I know many of you have talked about having those rules. Most of you have said you don’t like them, but admitted that you sorta understand why you have them. For me I couldn’t accept a hard and fast rule, but at the same time, anytime Nick has said “Put that computer down, you need to …” I put it down. Once when I came home my lap top was gone. I asked him where it was and all I got from him was a grin and a “I’m sure it will turn up.” It did, under a pile of clean laundry that needed folding! LOL! We’ve discussed bed time but don’t have a hard and fast rule about it.

So what does a girl do when she wants some rules to follow but nothing seems that important to Nick? We have had some rules in the past that really helped me. Most related to trying to control my weight – exercising, watching what I ate, not eating in my recliner and getting to bed at a reasonable hour. Others that helped me were time limits on getting clean clothes put away, not letting clothes (clean or dirty) pile up at by the foot of the bed, not living dishes sitting in the living room and other minor housekeeping chores. 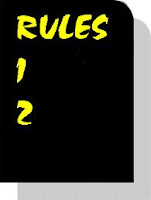 The problem with these is that they aren’t really important to Nick. For example, I went a long time not snacking in my recliner. Probably a good idea but eventually I started up again. Nick never said a word about it so apparently it’s not a rule any longer. Same about bedtime, I made it on time most of the time, but when I didn’t, he rarely said anything and certainly never really spanked so I assume that wasn’t important to him either. (Right now I’m staying up late visiting with Mollie many nights but once school starts maybe we’ll talk about it again.) I know that I should just do these things myself instead of waiting for Nick to enforce a ‘rule’ but I’m a spanko for goodness sakes! I feel loved and cared for when I am held to account for a few things.

I’m not worrying about this for the next three weeks (didn’t say I wouldn’t think about it, just not worry). We have the big family reunion coming up coming up and then we’ll be packing Mollie off and then I go back to school. But sometime, sometime maybe we’ll be able to get together and come up with a few things that we both care enough about that Nick will truly enforce them. We’ll see.

We did have a great rule at one time and surprisingly it was Nick’s idea. It was the best rule ever and I think every couple that has any rules should have this one. It didn’t last either but it helped our marriage while we were doing it. We may get it back someday, but only if Nick wants it. I’ll tell you all about it tomorrow.
Posted by PK at 2:00 AM