We headed to the pool shortly after we got on board and there was one thing I could tell right away. It was going to be fairly easy to keep Nick mind on the target! We’re lucky enough to have our own pool, so I haven’t been to many public pools lately. Nor had I seen such a display of the current fashion in swimwear. I think the lady (about my age) who sat beside me at the pool said it best, “I’ve never seen so much ass in my life!” Here’s one Nick caught on camera. This style was by far the norm and since that wasn’t the style chosen by Mollie or Shay I was content have the help of others to keep Nick’s mind on asses. 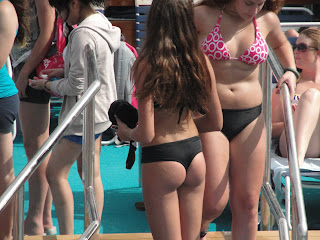 The size of the rooms helped too. I don’t think it was possible to get out of his reach when we were in there together so I was treated to a good ass smack nearly every time I turned around. Don’t’ch love that kind of attention?

One of the shows we saw as the ships version of ‘The Newlywed Game’. We had been to one on the last cruise we took so we too paper with us to see how we would have done if we were playing. One couple had been married 5 days, one 12 years and one 59 years! Nick and I did pretty darn well matching our answers. The first question was where did you go on your first date? We both put down the wrong answer – but we did put the same answer, LOL! We put the sleezy little bar he had asked me to. Thankfully the police had shut it down by the time we were going so we went somewhere else but it was funny that we had both remembered our first attempt. He got my bra size right, I was impressed. I barely knew it.

Another question was ‘what is your husband’s most annoying habit?’ I knew we wouldn’t get that one right. I didn’t share my real answer with the kids of course, it's his tendency to fall back into his vanilla habits!! 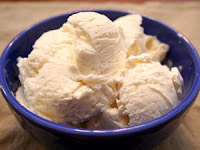 The children did peg his most annoying habit to them right on the money. Now we’ll see if he cares enough to ask me what they thought it was (if he still reads). One question asked ‘Which of your wife’s friends like to see in a bikini?’ Now that was a little tough. I don’t have a lot of 20 something friends with bikini ready bodies, but as I rolled my list of friends in my mind I knew at once who he would say and we did match our answers – the lovely CeeCi from out here in blogland.

The last question, ‘Where is the most interesting place you’ve ever made woopie?’ was easy for us. And you can read about that here.

Back in our room, tired but happy, I was delighted to see he was in a spanking mood as I undressed. I had made sure Nick knew the cane was not invited and thankfully it didn’t make the cut. It was mostly a good hand spanking but he hadn’t left home with nothing. I jumped when I felt a sharp smack. He had tucked in the incense holder. That is a fun little implement that packs a wallop! Lovemaking soon followed, it was a wonderful ending to the day. We had our fun, made our noise and were probably snoozing away before Mollie and Shay made it to their room next door.

I doubt that was the only spanking on the ship, but I know for sure where some was needed. There were about 8 couples that hung around together. I think the women were all cloned – they all looked alike, and I also felt that they really wanted a reality show to rival ’The Real Housewives of New Jersey’ or something. The women were drunk the whole time; at least I hope that they were. I would hate to think they would talk to, and about, their husbands that way if they were sober. It was vicious, hateful and just plain ugly. And the men just sat there like they were afraid to say anything.

I really wanted to gather the men in for a quick lecture. It would have gone something like this 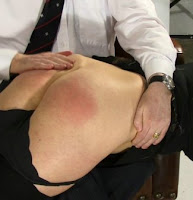 “If you have any balls at all you need to march over to your wife. Take that damn drink out of her hand. Grab her by the wrist and march her to your state room. The minute you get in there pull her over your knee, dress up and panties down. Then wear that ass out! Don’t stop until that butt is red hot and they are crying and begging and promising to be a good respectful wife in the future. Repeat as needed!!!” Now this wouldn’t be my advice to most people but trust me, these women needed their ass busted big time. See what a good dom I would have made!

Hopefully I’ll be home for the next few weeks and I’ll have some time to catch up on all my blog reading and maybe some time to write too. I do love my summers – best part of teaching!
Posted by PK at 2:00 AM