This has been a great weekend! I only worked half a day on Friday and Nick had the day off too. The only one working in the family was Mollie on Friday evening. Gee what a shame! Early in the afternoon Nick and I relaxed and floated around in the pool, won’t be much more of that this year.

I was anxious to check the mail. Shadow Lane had another 2 or 1 sale and I ordered 4 DVD’s. I like watching them – the story lines are weak at best and the attempts at acting are really not very good at all on the two we have but they’re still a lot of fun to watch. Nick enjoys them too but even more he like how I react to them! But sadly they didn’t come that day.

No real problem, we decided to watch one of the ones we had again. It’s always fun to snuggle in bed together for any reason and we laughed and talk about what was happening. Nick made the comment that perhaps we should try to follow one of the movies in real time and do everything they do. I’m game!!! I’ll bet his arm would give out before I would give in!

After the DVD Nick got out the toys and we played pretty hard. Mostly it was just good hard play from our nicer toys but doing some experimenting with changing positions. I found it really does change the feeling. Even some of my favorites really hurt when I’m standing with hands on the bed! 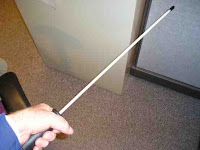 Lately I have been wondering about the cane. We don’t have one and I don’t want one. I don’t think I would like it for play and we don’t do discipline so there is no reason to get one. But I have mentioned it a time or two in passing because I am always wanting something that makes the feeling last. This time Nick used he shaft of the crop as a sorta cane. Let me tell you I did NOT like it at all, it HURT… at least while he was using it. But when it was all over, well that was what I felt for several hours and even in a few spot the next day. That I really did like, that got my attention in a serious way.

The sex was fantastic afterwards. I think we do really, really well for old folks! I mean since out sex life didn’t really take off until we were in our 50’s we have a lot of time to make up for. And we are!

BTW the DVDs came the next day. Now we have even more fun afternoons to look forward to. I’ll do my movie critics thing later.
Posted by PK at 8:17 AM