Happy Birthday and a story!

As you have seen several places perhaps, today is Paul’s birthday. I don’t think any commenter out here is better known or more loved than Paul. For a man who grew up thing he had no family he certainly has one now – a large one! He has people that look to him as a father-figure, a brother, an uncle or just a wise sage. I consider him a wonderful friend who has a life full of interesting stories to share.

In honor of Paul’s birthday I am posting another chapter of Harry Potter fan fiction from Paul’s friend JFlame. Happy Birthday Paul and everyone enjoy J’s story.

Sitting in Salazar's room's, Jay & Cleo glared at the fire in the floo, someone kept trying to come through. Jay had blocked it as best as she could but whoever it was powerful and bloody persistent. She had managed to distract Professor Potter and her dad with Salazar’s diary and potions ledgers so at least she knew it wasn’t them. The only other people capable of bypass a blocked floo were Nana Min and Grandpa Albus. §§"That’s it!"§§ Jay huffed angrily as the nosy headmasters head popped into the grate briefly. Rising from her comfy seat she stomped over to the potions bench and grabbed a bottle of fresh basilisk venom and a recently shed skin. Walking back to the fireplace she reached up to a black box on the mantle grabbed it and then swore loudly. "F**k it! Grandfather, do you have to do that?" She grumbled as she shivered.

Salazar looked down at her and chuckled. He loved doing that to her. Every time he came into contact with her he felt her strong power and seemed to become more solid each time. §§"I know what you’re doing but you've got to sstop. I need to do more ressearch."§§ She hissed tiredly. The last few times he had sailed through her she had felt drained. Salazar looked at her with concern in his eyes. As much as he wanted to be corporeal he didn’t want to harm her. §§"I have to go and ssee dad and grandpa Albuss, I’ll be back later."§§ Grabbing her bag and putting the venom, skin and box inside, she wished herself to her dad’s lab He wasn’t alone.

Professor Potter, the bloody git-who-turns-up-everywhere, was actually helping Sev to brew the Lycanthrope potion. (Werewolf cure) Suppressing a smirk as Potter dropped the book he was holding and jumped in surprise at Jay’s sudden appearance, she walked over to Sev and handed him the venom and skin. Ignoring Potter completely and wrapping an arm around her dad's waist, Jay rested her tired head on his arm. Sev looked down at his slightly pale daughter and immediately shifted his attention from the potion to her.

"What's wrong?" He asked as he cupped her chin in his hand causing her to tilt her face upwards. "Have you got anymore Core Replenishment potion, dad?" Potters gaze snapped over to Jays face in concern. "You took one yesterday” came the quiet reply.” What have you been up to that’s drained your Core so soon?" Jay glared at him. §§"Mind your own bloody business murderer!"§§ She hissed.

Sev didn’t understand parseltongue but he could tell by Potters face that it wasn’t 'thanks for caring'. "English, young lady! You’re in. mixed company." He admonished. Jay sighed and explained that Salazar had passed thru her again. "I’m fine though. Just a little tired." She added quickly. Sev didn’t believe her for a second. "Don't give me that!" He snapped. "I want you to go to Poppy for a complete check up, no arguments Jay-Merlina!" Now it was Potters turn to hide a smirk.

He knew that Jay hated the hospital wing more than he did. Jay was very lucky that she wasn’t at full strength because the choice words and foot stomping would have earned her a good spanking otherwise. In truth the check up didn’t take long and Poppy was very understanding. Her magical core was low but it wasn’t at a dangerous level. After a level 3 core potion, Jay legged it. She really wanted to go back to the chamber and sleep but first she had to give the box to Grandpa.

For a few minutes she argued with the gargoyle before she lost her patience and threatened to wish him to the bottom of the black lake. Once on the stairs she cursed, the constant revolving made her feel queasy. When she did reach the office she stumbled through the door and collapsed into Dumbledore’s arms. Whether it was the fact that her core was low or that Salazar had been on the other side of the door and Jay had fallen right through him we may never know. Thankfully Albus managed to catch her before she hit the floor. Salazar, however, was a completely different matter. He hit the floor with a thud and a very modern swear word escaped from his very corporeal lips.

Quickly lowering his unconscious granddaughter to the floor, Albus grabbed a pinch of floo powder from the pot on the mantle and fire called Poppy and Sev. Both responded promptly and soon Jay was being levitated to the hospital wing. Sev’s first reaction was to cast enervate but Jay remained unconscious. All any of them could do was to make her as comfy as possible and wait for her to wake up. 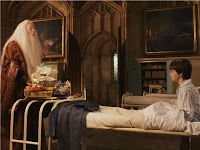 In the mean time there was a long dead Hogwarts founder, no longer a ghost, to deal with. Albus called a staff meeting to discuss the new development. "Albus, how is this possible?" Professor's Longbottom and Potter screeched. Snape gave them a trademark sneer. "Yes, lets all ask the one question for which no answer can be found." His tone caused Neville to blush and Potter to wince.

"Thank you Severus, perhaps it would be prudent to ask Salazar about this?" Albus suggested knowingly. Salazar stepped forward slowly, he still had to get used to this solid thing." Surprisingly he felt quite nervous. When he had been alive he hadn’t been a particularly nice person. Very much into the pureblood scene. After death he had chosen to haunt the school but that hadn’t worked to his advantage so he confined himself to the chamber of secrets, only showing himself to a select number of people. Now his peers looked at him for answers. Some looked at him in awe, some in fear and some in anger. Sev actually looked as though he was going to hex him at the first sign of trouble. Deciding quickly that Sev was the one person that he really needed on his side he focused on him as he explained.

"I will start by apologizing. I had no way of knowing that my interaction with Jay would cause her to fall into a coma. Now that i am corporeal I will devote my time to researching Jay’s predicament and I will find a way to bring her back to you!" His words dripped with sincerity and Sev surprised everyone by walking over to his ancestor and shaking his hand warmly. Albus and the other professors followed suit, thanking Salazar and welcoming him back.

"Well I suggest that we continue this conversation when we have some more information to go on. For now I shall order some refreshments while we decide what your role within the school shall be, Salazar. Paulie!" At these words a house elf appeared and stood waiting for his orders. "We would like some tea and biscuits please Paulie." The elf nodded and as he snapped his fingers two trays laden with goodies appeared. "Will there be anything else headmaster Dumbledore sir?" He chirped. Albus nodded and gestured towards Salazar. "Paulie I believe it is time to promote you. Salazar is in need of an elf. Would you be willing to become his personal elf?" Paulie nodded again and went to Salazar. "Will you be wanting anything now master Slytherin sir?" Salazar smiled down at the little creature. "Not right now Paulie. I am honoured to have you as my elf."

Grinning widely Paulie disappeared with a small pop. Halfway through his first cup of tea in nearly 800 years, Salazar jumped to his feet, ran at the wall and with a crash he rebounded and landed on his arse with a thud. "It’s a bit hard to float through walls when you’re solid, Sal!" Harry quipped. From his position on the floor, Salazar glared up at him. "You would do well to remember whom you are addressing boy! I was once referred to as Sal when I was alive. The brat regretted his words when i enchanted a paddle to follow him around for a day, spanking him whenever he was rude! I would be pleased to see if i can remember the incantation!" Harry blushed and mumbled an apology. Standing to his feet again and rubbing his nose Salazar turned to Albus. "Jay is awake!"