I used to email Nick a lot in the beginning. Sometimes I still do. It is interesting for me to go back and see how things began for us.

I took my own advice and emailed Nick to thank him for great sex the other morning and to tell him some other things I would like from him. One of the things I told him was that it would be wonderful if he would flip the covers down and give me a good pop on the butt before he leaves for work some morning. So this morning I’m half asleep he flips the covers back and gives me a pat that wouldn’t have injured a mosquito. I wanted to sit up and say – Put some muscle in it, you hit like a damn girl! (No longer politically correct, but you get my meaning.)

I know I can’t be mad at him when he is really trying. He didn’t ignore me, he did try, but it wasn’t what I wanted! Grace said pretty much what I feel. I want to tell Nick, dominate me, damn it, and do it right now! I’ll tell you exactly what I want you to do! Can you feel my conflicting emotions here? 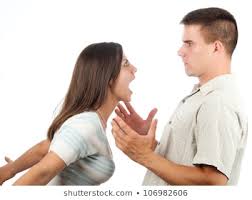 He hasn’t said anything but I think he is still worried about the bruising from last Friday. It has persisted but it has not been a problem to me in anyway. I’m just worried he will never do anything but pat my butt again.

I know that Nick sees this as a game while I want it to be a way of life. I have just been thinking of how I wanted it for forty years longer than he has and I don’t have forty years to wait for him to catch up. I have to push some. Nick and I never fight, I mean never! I used to think that this was a good thing, but now I just think it shows a lack of passion.

Some of you have talked about bratting your way into a spanking. I could never do that. First, he would think I was insane because it would be so unlike me. Second, if I really did something to make him mad he would just shut down and ignore me until I came to my senses. I mean he would never spank me if he was mad because he would know that that was exactly what I wanted.

I am probably just antsy because I see no time it the immediate future for playing. We have a big yard sale this weekend and a family reunion next Saturday and Sunday, thirty or so people at my house for 2 days. They don’t sleep here but they are here all during the day. I love having this reunion each year but I just want to have some time alone with Nick!