Another special day, my baby is turning 18 today. That sure sounds strange. She was 14 when I started blogging. Just a kid but now she's grown. She is not just legally an adult, she behaves herself and conducts herself as an adult also. Who would have believed it?

When she was growing up, let’s say from the age of one until she was about eleven, there were many times I felt I would have cheerfully given her to the first passing stranger. That child would have argued with a fence post! Nothing was easy during that time. We fought constantly – from fussing at her to get up in the mornings, getting her hair brushed, putting on her socks!! Everything was a battle. The fight would continue after school, trying to get her to pick up her room, do her homework, go to bed! It made for long days. I dreaded the teen years like a tooth ache.

But then there was a change. Maybe it was her, maybe it was me. When my mom died Mollie was 10. Mollie was so mature and caring and helpful with mom I think I began seeing what a wonderful person she really was. I think as I began seeing who she was becoming I probably treated her with more respect and she responded by becoming more and more pleasant.

Now she gets herself up in the morning and is out the door to school before I am. Homework is always done, she is the most sought after babysitter in town. When she is out with friends she often calls or text to tell me where they are and when she’ll be home. One friend asked me if I was going to change any of the rules when Mollie tuned 18 and I had to laugh. Mollie has no parental rules at this time because she doesn’t need them. I know she will still need our help and guidance for a while to come I have no need to tell her what to do. If she were wild and crazy I would but she is as mature as they come. 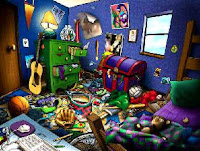 Now as far as cleaning her room… I’m afraid that part hasn’t changed. But I really don’t care. It won’t be many months until that will be a problem for her and her college roommate to work out. My problem will be trying to find someone else to blame the mess in the rest of the house on. I don’t think Nick is going to believe its mice.


So to my grown girl, who will always be my baby - HAPPY BIRTHDAY!
Posted by PK at 1:00 AM