What are your thoughts on spanking children?

Were you spanked as a child? Were your parents? What about your kids? So many books and stories have the women say, “You want to spank me, like I was a child?” We talk about spanking a lot out here, but I’m curious about what people think now days, because the idea of spanking children has changed a lot in the past fifty years.

Spanking was the norm here in the south as I grew up. Country children were ‘whooped’ or ‘switched’ while more sophisticated

parents spanked or paddled their kids. Paddling was allowed in schools – it actually still is, thought only an idiot administrator would use it now. When a teacher was going to paddle a child another teacher needed to be there to witness. The first year I taught I was asked to witness a paddling. The male teacher paddled an 8th grade girl for chewing gum. I was new and green and went to witness because I didn’t know what else to do. I felt then, and still feel, that both of them enjoyed the encounter too much.  But I sure as hell didn’t! I finally got up my courage (a very unusual thing at the time) and told that teacher to never ask me to be a witness again. He didn’t.

I was spanked as a child, rarely, but it happened and I have no doubt I’d done something to deserved it. I grew up with no fear of my parents and I still love them dearly although they passed many years ago. I know my father and his six rowdy brothers were on the receiving end of a belt or a hairbrush more than a few times. And as fine grown men I could see the love and respect they felt for both their parents. So I don’t go along with the assertion that if a child is spanked they will grow up to hate and fear their parents nor do I believe that they will all become serial killers.

My own children were spanked a time or two, but it was a rarity. I’ve written about this before but when Mollie was almost four she took the baby powder and covered my whole bedroom – we had dark blue carpet at the time. It was a mess! And very hard to clean. I sent her to her room for a time out – about fifteen minutes and explained to her what I was upset about and to leave the baby powder alone! Then I spent hours cleaning and doing laundry. 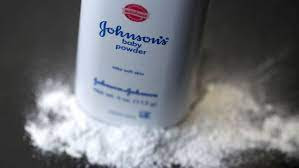 The next day she did it again! Let’s just say mommy wasn’t happy. I marched her to her room and told her she was getting a spanking. And she got one – about four swats on a fully-clothed bottom. I doubt she really felt them and I know it didn’t hurt, but that ‘spanking’ impressed upon her how very upset I was with her. When she got up the next morning she came to me and said, "Mommy I been tinking. I don't tink I'm going to powder your room today." I told her I thought that she had made a wise decision and she doesn't seem to hate or resent me today.

I talked to my kids and they listened – something I fear we’re losing as both parent and children spiral further into phone addiction. I did a lot of discipline by watching TV with them. When a kid would do something stupid or dangerous on a show, I’d say something like, “Nana and Granddaddy would have _______ if I’d done that.” Or maybe, “Wow, what would you have done if that was your kid?” And it would start a real discussion without me lecturing or have them feeling like I was fussing at them.

So having said all this, would I recommend using spanking as a discipline tool for children today? While deep in my secret soul I’m not against a stern face and a moderate swat to the behind of a young child doing something they KNOW they shouldn’t do, I would have to say no, I do not recommend spanking children.

The reason? I’ve run across too many parents throughout my life, and especially in my teaching career, who are crazy as hell!  In my head I hear the word spanking in reference to a child and think of those few swats to the butt, but others picture yanking off a belt and beating the child severely. So because of all the crazies in the world, I give a firm ‘no, never!’ to spanking children. 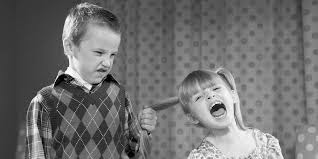 If this were an actual picture of my kids
it would be Mollie pulling LJ's hair.

But I do have some good ideas on disciplining children. I never gave advice when my kids were young, because I didn’t know if I was right or how they might turn out. But they turned out well and I’m going to post some things I think worked well. I know a good portion of my readers won’t have any use for this so I’ll give you fair warning to skip my next post. A girl has to have something to write about.