Fantasy Friday Revival - From the Journal of Dr. Spankenstiein

I am so happy that Friday has finally arrived, and with it another wonderful story. This one is from a man's point of view.
From the Journal of Dr. Spankenstein

She’s waggling again. This behavior would have likely gone unnoticed by the casual observer. But being a trained scientist, I notice these things: the subtle sway of her hips, the sparkle in her eyes, her out-thrust chin. Just as honeybee workers perform their waggle dance to relay information to their sisters in the hive, my mate performs hers to relay her need to me. It is such a primal part of her that I doubt if she even knows she’s doing it. If I’ve read her correctly, she is need of a recreational spanking. 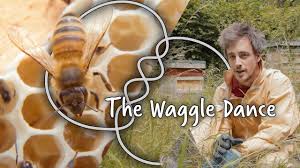 Penelope and I had been married almost 6 years before we discovered her need for spanking. Coming from a very proper background, it had taken her a while to loosen up enough to experiment in the bedroom. We tried light bondage a bit, but we really struck a chord when I lightly spanked her bottom. She really took to it and asked that it become a permanent feature in our play. She even took a subscription to Sassy Lady, a magazine that featured fantasy spanking stories. We even purchased a few tools of the trade. She began to crave more severe treatments. She had truly found her niche.This changed 4 years later with the birth of our first child. We no longer had the time, energy, or privacy. After nearly a decade of Penelope either being pregnant or lactating, we finally got our bedroom back to ourselves. She began to crave it again. Her favorite magazine had gone under during our hiatus. She struck out on the internet and discovered a bold new world. Like a bee sampling flowers, she sampled blogs and sites until she found the perfect fit for her. It seems she really likes a mix of domestic discipline and erotic spankings. She bravely explained her needs to me and I have worked diligently to fulfill them.Being a trained observer, I’ve learned to look for the verbal and nonverbal cues that she displays to work out the actions that best address her needs. I’ve concluded that she needs two different treatments depending upon the situation. The first is what I call a therapeutic or punitive spanking when she is under a lot of strain or has wronged a friend or family member. Most of my cues are verbal. She could be snapping more frequently at the children, using the flat “I’m fine” voice, or The Voice (think Hillary Clinton after being asked an unflattering question). These are the more severe spankings that contain harder strokes, last longer, and usually involve multiple implements. The act is almost an act of contrition or emotional release for her and she is usually greatly relieved and calmed afterwards.The other type, I’ve labeled a recreational spanking. In this case the horny little minx simply wants her bottom reddened for the sensation of it. My cue for this one is usually nonverbal, she waggles. This is the type that I’m faced with tonight. After we’ve gotten our brood to sleep, I instruct her to lock our bedroom door, disrobe, and get on all fours on the bed. I start out slow by rubbing and kneading her shapely bottom to increase blood flow in the target area. I then give her a rapid succession of bare-handed swats. This is followed by more kneading and rubbing. Since she has been particularly good this week, I next use her favorite paddle, a medium-sized hardwood paddle with lots of thud. 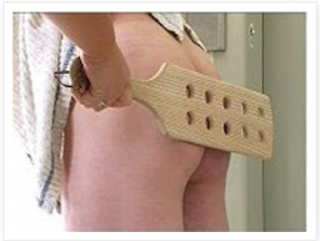 After about a dozen whacks with this beauty, her skin becomes flushed, her knees begin to weaken and her reddened little behind begins to perform a very different waggle dance, one whose meaning is both unmistakable and irresistible………oh yeah………I think we’ve created a monster.
~o~

I do like a story from the man’s point of view. We don’t have nearly enough input from some of the guy out here. This was written by Carye’s Papa Shrek. Carye was a very active participant out here many years ago and I'd sure love to see her back. If you, or your man, would enjoy trying a story please send it to elisspeaks@yahoo.com