I don’t know how old everyone is out here. I picture you all somewhere between 35 and 50.  You know, full grown-ups, but still young.  I’m not in that bracket and haven’t been for a long time. Sometimes I see Nick and I like classic old cars. We can’t go from 0 to 60 in ten seconds anymore. It take a little time and attention to get the motor started and then it does best to just let the engine idle and warm up a little. Once that happens we can take just as fast and exciting a ride as any sporty newer model.

I think that’s what our emailing does for us. They give us time to think, to fantasies, to anticipate… we’re in no hurry. We’re empty nesters and we know the best times for each of us. So we wrote back and forth, there were teases and threats and ‘instructions.’  We had an ‘appointment’ Friday afternoon and by the time it rolled around I was ready!

I needed a spanking and I needed a hard one. Nick usually spanks me when I’m stretched out on the bed, I like that position the best, but when things get going I tend to kick my legs up to protect my butt.  Nick took care of that by getting out our soft cuffs and cuffing my ankles together and securing them to the foot board. There was no chance of kicking.

As requested there was a good long warm-up. I could feel my bottom getting hot, but at a nice slow pace. But then it was time to step it up and Nick brought out the bath brush. I wanted it and dreaded it at the same time, I think maybe Nick felt the same way.

That brush is wicked. It was the short handle bath brush, a very different feel from a real hair brush. It’s lighter but has an awful surface sting, if not quite as thuddy as a hair brush. I obviously survived and so did Nick.

But that wasn’t the end. I had asked for a few with the cane for its lasting effects. A few meaning no more than four. Remember we were doing a little role playing and Nick did some improvising. First he changed my position. We have a padded bench at the foot of our bed. He had me kneel on it and place my hands on the bed.

“Nice target,” he murmured, as he stepped away. Then he tell me to get ready for eight of the best. Eight! Hell, I wasn’t sure I could take four with the friggin’ cane and he wants to double it? But that wasn’t all. He explained that I was getting four with the cane and four with the belt. The implement choice would be mine for each stroke. Like #1 the cane, #2 the cane, # 3 the belt and so on. Also, if I didn’t think the stroke was sufficiently hard enough, I was to ask that it be repeated. Aww, shit! Where had all this come from? I wasn’t against it, just surprised by it. Because of the mindset I was in (the roleplaying thing) I happily felt that I didn’t have a choice. The timing between strokes was also up to me. I could ask for another right away or  I could wait a bit as I absorbed the pain. He was in no rush. Being honest with him I did ask for three strokes to be repeated. I think Nick was honestly trying to get a feel for what I needed and wanted and expected. I’d also like to add that my sweet husband had gone out and bought and prepared a nice piece of ginger, just to add a little more spice to our afternoon.

The afternoon was intense – and that was exactly what I needed.

The love making that followed was just as wild and passionate as that of any twenty-year-old couple. Let’s just say that I had a passing notion to take up smoking when we were done. 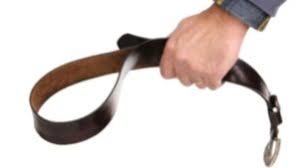 play. Unless that damn BadAss stick her nose into things too often. But it helps me knowing its possible and how to ask for it when I need it. I still think the cane sucks, but that belt, ummm….
Posted by PK at 12:00 AM