As promised here is part two of this weeks Fantasy Friday, click here for the first part of the story.

By the time Bill’s birthday came the next week Ali was a basket case! She had read enough blogs by this time to know that many women said that the anticipation was worse than the spanking – she hoped so!

Dressing that night was tough. Looking through her drawer for lead-lined panties had been fruitless and it didn’t sound like she was going to be able to keep them on anyway. She settled for a matching set of bra and panties, lavender and lacy. Perhaps they would be a distraction and at least speed things on to the part of the evening that she looked forward to more than the spanking.

Ali turned to stare at her reflection in the mirror. Who was she trying to kid. She was probably as excited about the spanking as Bill was now. Yes, she was scared but now she had to see what it was really like. Next was trying to decide on panty hose, a garter belt and stockings or bare leg and sandals. ‘Great’ she grumbled to herself, ‘I haven’t found that post that gives the proper way to dress for a first spanking!’

As nervous as she was, opening the door and seeing Bill calmed her. His kiss, his touch, his taste and smell – everything about him had come to mean love and security to her. The wolf whistle and the admiration in his eyes gave her a small thrill too.

“Good Grief, Ali, how am I supposed to keep my hands off you through dinner?” His hand gently massaged her ass as he whispered in her ear “I’m very excited about my gift”.

Ali tried to swallow a gasp at the flow of wetness between her legs at his touch. She had been this way for days. She seemed to be in a constant state of arousal, but she didn’t want Bill to think that the idea of a spanking was causing this. Okay, she had agreed to one spanking, but if he thought it was affecting her like this there was no telling where it might end. 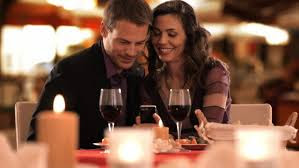 They had gone to her favorite restaurant and she was sure the meal had been wonderful. But as they arrived back at Bill’s apartment Ali realized she has no idea what she had eaten or what they’d talked about during dinner.
Bill didn’t have any doubt where Ali’s mind was as they ate. With a light kiss and a hug Bill took her hand and led her to the bedroom. The first thing she spotted was an armless chair and an ottoman sitting beside it. Bill looked at Ali and laughed. “Honey, this isn’t an execution, it’s a birthday spanking! You don’t need to look so scared. What are you thinking right now?”

“I was thinking that I should be dating an eighteen-year-old instead of someone thirty-eight!” Bill laughed and gave her another hug. “Don’t forget the one to grow on now! And don’t think the warm up counts either!”

“Warm up? But… wait, you didn’t say…” Ali began sputtering. Bill raised his eyebrows and she quieted.

“I’m in charge now honey and you've read enough to know that every good spanking begins with a warm up.” Without further discussion Bill took the chair and guided Ali over his lap.

Embarrassment was the first emotion for Ali. She was physically comfortable enough with her upper body on the low ottoman but over his knee, truly bottoms up just seemed to be such a submissive position.

“Honey,” Bill began as he started rubbing, I have wanted to spank this beautiful ass since the first moment I saw you. And with that he began a firm but not hard spanking over her loose flowing skirt. He’s not going to spank hard, Ali convinced herself, just before he increased the tempo. It didn’t hurt but he did have her attention and her attention increased dramatically as he flipped up her skirt.

“So beautiful” he murmured as he began rubbing. Ali was in such a state already that she blushed and could only hope he did not yet realized how wet she was. Suddenly the warm up took on a different intensity in both speed and firmness. This was really starting to sting as Ali began wiggling a little. “So you’re starting to feel it are you?” She could hear the grin in his voice.

“Yes honey, I’m sure. You’ll know when I start spanking for real. For one thing a real spanking is not done with panties on. The stinging warm up lasted several more minutes and was intermingled with rubbing and squeezing. When Bill finally slipped his hand between skin and panties Ali instinctively clamped her legs together.

“You don’t want me to pull your panties down? Alright, maybe it would be better if you did it for me.”

Ali only had time to think “NO” before she found herself on her feet. Bill sat back with his arms crossed and looked pleased with himself. “Everything Ali, take off everything, I want to see all of you.” 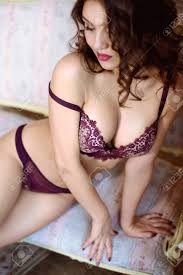 Ali had undressed in front of Bill dozens of times but never like this. She didn’t even try to identify her feelings. Looking down she quickly stripped down to bra and panties. “Wait” Bill commanded. “Look at me Ali, now keep going.” With some difficulty Ali looked directly into his eyes as she removed her bra and finally her panties. Bill reached for her and again pulled her across his lap.

The first ten birthday spanks alternated on her bouncing cheeks and were noticeably harder than the warm up. Bill rubbed lightly as he asked, “What do you think honey, can a spanking be arousing?”

Ali couldn’t make herself admit everything she was feeling. “No,” she almost whispered “spanking doesn’t excite me sexually.” She jumped as Bill’s finger ran over her swollen, dripping clit.

“Ali, don’t you know bad girls can be spanked for lying?”

The next ten caught Ali in mid-giggle and made her gasp. This was really stinging! Bill concentrated the next ten at the top of her thighs.

“I must be doing something right. This is a spanking you know. You can do it honey – nine more to go including the one to grow on.” The last nine were right on the ‘sit spot’ and would be a reminder that she had really been spanked.

“OWWWW, OWWWW!!!” came Ali’s gusty yells. Tears stung in her eyes but she wasn’t really crying. It was over! She had survived and now only had to cope with what she was feeling. Nearly all these sensations had surprised her. But none more than her growing need.

Bill pulled Ali up into his lap as she caught her breath. “You okay?” he asked. Ali nodded into his neck. Bill placed her on her stomach and quickly discarded his clothes. Ali squirmed as he rubbed her ass with cooling lotion, it felt good but she was tender. Her other feelings were surprising her with their intensity.

“Please,” she whispered “I need you inside me.” Bill straddled his lover as his eyes swept over the beautiful sight before him. This amazing women was his, this wonderful ass, turned a beautiful shade of red by his hand, was his. All of her was his… 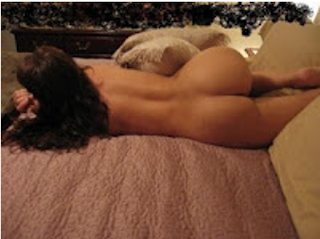 Pulling her to her knees Bill began rubbing his cock between her legs over her swollen, dripping lips as he reached to fondled and gentle pinch her nipples.

“Please” she whispered again. Pulling her to him he entered her with a deep thrust as Ali gasped, pushing back loving the burning sensation on her hot ass. He plunged over and over until she couldn’t hold back another moment and she came with more intensity than she ever had before.

Bill could feel the strength of her orgasm and with one more thrust came deep within her as he let out a growl of passion. Ali collapsed on the bed with her lover. Never, she thought, never had it been so good. Bill at her back held her firmly as he caressed her breast.

As her breathing calmed, he kissed her neck and spoke quietly, “You’ve had your first spanking honey. What do you think?”

Ali vaguely heard the word ‘first’ and smiled slightly to herself. Bill continued, “Are you ready to be in a relationship that includes spanking?”

I hope you enjoyed my story and I hope I will be able to turn it into a book some day. If anyone else is will to write a story for us please send it to elisspeaks@yahoo.com