I thought this weekend would be busy, but it outdid itself. There was a small festival in town put on by the bookstore where local authors could come and sell their books. It was to be held outside on the square, everyone in masks so I wanted to go. I invited my sister to come with her books also.

When she called to tell me she was headed this way, she said she had woken up during the night with a strange rash on her back and arms, but that if I wasn’t scared of her she was planning to come on. I told her that would be fine. When she got here the rash was quite noticeable on her back and her arms and itching like crazy. She had taken a Benadryl earlier but had left them at home. I went to the drugstore for more and for some anti-itch cream. It helped a little. 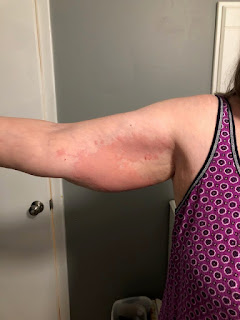 After dinner I looked at her back again and it was much worse. We’d also been texting with both our daughters and they had been texting with one another. We’d asked all the usual questions – any new detergents, new soaps, new clothes, new sheets (this had awoken her at three A.M.) The answers were all the same – nothing new! 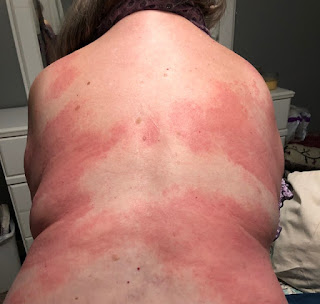 The ‘daughters’ were worried, boy they really start getting bossy as they near thirty,  and in the end I took her to an urgent care shortly before they were scheduled to close for the evening. Those folks didn’t know what had caused it either, but they gave her a shot of steroids and a prescription for a cream.

By the next morning it was more tolerable, but it had spread to her lower arms and her palms were itching like crazy. We made it to the festival. It wasn’t a great success. It was very hot and we were in the sun the whole time. Selling your own books takes some work, smiling, chatting, laughing, truly engaging the potential customers. Extremely difficult when you are both wearing masks! 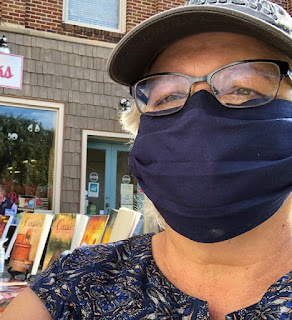 Sister sold four books, I sold one. It was to a very strange little man. He was about five feet tall, barely. He grabbed the final book in the Cassie series and wanted me to sign in to Tammy. I did. Then he scuttled away not going around to any other tables. I hope Tammy enjoys it.

Meanwhile my BIL was doing some research. My sister had mentioned one thing to him – she had painted her nail orange for the festival. He had googled ‘allergies to nail polish’ and found some strange possibilities. 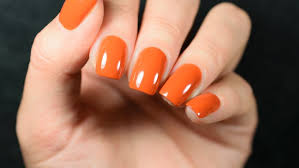 One mentioned it could cause rashes on your body far away from the hands. Has anyone else experienced anything like this from nail polish? She removed it as soon as she could and was better the next day, but not completely back to normal.

It wasn’t a smooth relaxing weekend but we all survived. Don’t think I’ll be painting my nails anytime soon though.