The second thing Nick said to me during our attempt to talk was, “It seems that what you want keeps changing.”

That was a real shocker to me too. After giving that a lot of thought 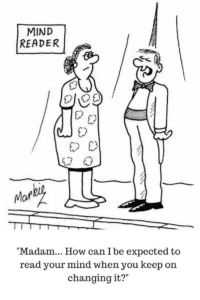 I began to understand how he could have perceived it that way – but it’s not true. All I’ve ever wanted, since puberty, was a man who would make a few rules. Not many, not about every little detail, but about a few things he cared enough about to hold me accountable and spank me when I didn’t follow through with what he said. That’s it. That’s never changed. That would have been enough to satisfy my desire to be submissive. I’ve said before Nick and I don’t fight, we really don’t. We agree on most things and neither of us has to have their way or even the last word. I don’t get ill tempered and snippy and said hateful rude things to him. So none of those issues were ever part of our DD.

I think I know where Nick might be coming from – in thinking that my desires have changed over the years, is that I’ve tried to explain in in a million different ways. I might have given different suggestions or scenarios of how this might have worked in our lives. I’ve suggested him making a few firm rules, I’ve suggested maintenance, keeping a ‘list’ of my transgressions, and many, many more ideas. But as I see it, as I truly believe, what I wanted and what I asked for has never changed. If anyone were to read back on the blog over these twelve years I think they’d see that.

In the answering email I told Nick:

I know we saw DD from two completely different points of view. One rule we decided on – no clean laundry left out more than twenty-four hours – seemed reasonable. I did better about getting it put away. But I’d slip up and you’d spank me for it and I’d work hard to do better. Sadly bad habits are harder to break than good habits are to form so in few weeks I’d slip up again and leave the clothes sitting there.

Your head logically said, “I told her to get these put away. I spanked her when she didn’t and here she’s done it again. Obviously, spanking doesn’t work.”

My head, just as logically said, “I forgot again, but he didn’t spank me this time. Obviously he never really cared about me following the rule to begin with.”

Many of my friends here have this firmly established in their marriage. But if you’re feeling like it’s not, maybe ask your guy two questions.

First ask him to tell you how he understand it all – if you’ve been telling him what you want, ask him to say it back to you so you’ll understand what he’s hearing. It may not be what you think you’re saying.

And the second thing – and I’m afraid I’m guilty of not asking this one – ask him what he’s getting from TTWD and what he really wants.