Never be kind to small children or kittens

I don’t mean to sound like a cruel person but not following the above advice can cause an extremely sore behind. To explain, several of my blogging friends have commented from time to time that a toy that they had innocently bought for their child was turned into a not so innocent pervertable by a creative HOH. I would read these reports with a slightly superior smile on my face, as our ‘toys all around’ days have passed (until we get some grandchildren). I felt safe.

Then last June Mollie brought home a tiny, bony, broken legged stray kitten, complete with ear mites and worms. (I wrote about it here). I have to tell you this little thing has become a real joy. He is so sweet and gentle, curious, playful – the works. If I were willing to give him up he would be a perfect cat for a nursing home. He likes to visit and cuddle but he has never used his claws. With Mollie away little Hank has become my baby. And that caused me to let my guard down.

Trying to be kind to my new little one I bought him a toy, much like this – 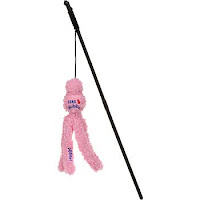 Yeah, yeah I know – I’m a spanko. I should have seen the potential, but in my eagerness to be kind to my kitten I was blind to the danger.

Jump ahead to last Friday. Fridays are my weigh in days. I’m not doing so well. Since I was good at forgetting to tell Nick what I weighed each week and since Nick sometimes forgot to ask he made a rule (Yeah! At least one rule) that I write it in a small note book. Usually he doesn’t look at it until after I’m gone, since he doesn’t have to work on Fridays. I felt pretty safe. Mollie would be home before me and it’s a long weekend so nothing would happen until at least Tuesday. Not so! The sneak double crossed me and looked early. I didn’t know and even when I saw him with Hank’s toy I never gave it a thought. Nick too has succumbed to the kitten’s charms and often plays with him.

So like a fool I’m still running around in my bra and panties when Nick comes into the bedroom with the toy and ‘the look’. Oh Crap! I HATE anything cane like. Nick stands there with the pervertable and ‘the look’ and says “You’re going the wrong way on the scales. Maybe you should have gotten dressed sooner this morning.”

I didn’t have a good defense so I just kept my mouth shut as he bent me over the bed and started striping my butt. Now I’m not saying a cane isn’t a good discipline tool. Obviously I want to avoid it but with good leather or even wood sometimes you can absorb the pain, yet think about what you’ve done. When Nick used the belt – even really hard, thoughts run through my head, what I’ve done wrong, how I could be doing better, even sometimes appreciation for Nick taking the time to help me in this way.

When he used the cane all that’s running through my head is “THAT FRIGGIN THING HURTS LIKE A MOTHER F**KER! He must STOP now with that *@#^!^*# thing. Who ever brought up this ridiculous lifestyle? They must be nucking futs!

Of course being the perfect submissive wife I accepted my discipline. Accepted the hug he gave me, while I vigorously rubbed my stinging ass. And I very much accept his right to handle things in the way he sees best. But I will ask this question –

Should discipline be done with leather which leaves the wife sore, thoughtful, contrite, submissive and eager to do better or with a cane like object that stings far too much to allow coherent thoughts other than “I’m going to break every f**king object in this house that can be used like a cane – right after I become a switch and let Nick see how it feels.” Just asking…

I hope you all know I’m just teasing. I’m thrilled that Nick is willing to explore this lifestyle with me and he can do it the way he feels is best. He’s always willing to listen to my thoughts and take them under advisement so to speak. I’m happy and hope we can get further and further into our adventure of discovering all the joys of our empty nest, but should the cat toy and the canes be misplaced through some strange misfortune, I won’t lose any sleep over it.