Hmmm… could things be about to change around here? I got a very interesting email from Nick Saturday. He said many of the things I had been hoping he would say. Now don’t get carried away here – we aren’t going into a DD relationship. I realized a while back that for all I love the idea in fantasy, in real life it wouldn’t work for us. Neither of us would be comfortable. (But my hat is off to my friends who have this kind of relationship and it does work for them.) For the most part we just don’t need it. What I want is some help with the diet. Now understand, I use the word diet loosely – it’s a catch-all word for wanting to be healthier, look better, feel better – the works, not just losing weight. But losing weight is a part of it because I was so much happier when I was losing and looking and feeling better – everything in my life had a rosier outlook. I want that back. And Nick has offered to really help again. I feel better already!

We’re still in the working out what all we will be trying and doing. He has made some suggestions and has asked for my input on some consequences. Here is where many vanillas get confused. They’re thinking:

If they make an agreement on rules or goals or consequences and she doesn’t follow through she gets spanked. But wait, she likes to be spanked. That doesn’t make sense.


Good point vanillas but let me explain. When Nick asks me to do something and I agree then just knowing that he is really willing to back it up with a spanking if I don’t follow through, well it means something to me. Knowing he will do this for me is often all it takes to get me with the program. I call it ‘engaging my mind’. When Nick is willing to make some ruled and enforce them it’s exciting for me. I’m happy and it is so much easier to do the things I know I need to do.

He did throw out some ideas that had me squirming. He knows that there are implem 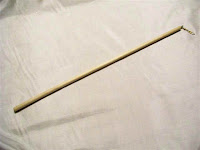 ents I’m not very fond of. He mentioned the dreaded blind adjustment rod or dowel rods – both are way too cane like for my taste. But honestly I could see them as good deterrents. But then he stepped over the line and went from discipline to sadistic cruelty by suggesting he might also use ‘Some other consequence that you can’t dispose of so quickly” and went on to mention me having to get off my butt and do some work around here or having to go to bed earlier. Ouch – now that would be serious!

We haven’t decided anything but we’re talking/emailing and it has me feeling much better. He also mentioned me doing my assignments again. We did them for a long time, for those of you that are new – he just asked that I email him once a week with what was going on in my head. I didn’t keep it up and he probably forgot about it most of the time too. I didn’t ever start back because I don’t think I’ll ever convince myself that he really wants to hear what’s rattling around in my head. But it might be something we can try again if he wants to.

We’ll see and I’ll let you know, but I feel more positive than I have in a long time.
Posted by PK at 12:05 AM