Happy Friday everyone! I hope you all enjoy your Easter weekend and time with family if you can. Today for Fantasy Friday we are continuing the story we began last week – Help Wanted. Click on the title if you would like to go back and refresh your memory. I read the first part and liked it; I got to read the rest and was firmly hooked so you do have more to look forward to!

Amy stretched slowly then ran to the mirror to inspect her backside. It was amazin 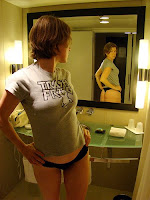 g that he could inflict that much pain and never leave a mark. A week into this odd arrangement she was convinced he was looking for reasons to punish her. When she accused him of setting her up for failure he simply laughed, then assured her that her contract did not require a reason, he could punish her for his own enjoyment if he wanted. Astonished that he would admit he spanked her for pleasure she called him several nasty names and found herself upended for an extra, mid-day session. Even more surprising was her own reaction. Not only did it hurt far more than she had expected, but she found herself wishing he would make a pass at her. Each time he pulled her across his lap she found herself wiggling, hoping to feel some sign of arousal on his part. Horny and irritable, she gave up on sleep and decided to make an early visit to the gym.

Slipping quietly into the gym to avoid disturbing the staff Amy was shocked to find RJ hard at work on the slant board. Clutching a large weight disc to his chest, eyes closed and wearing only a skimpy pair of shorts and headphones, he did not see or hear her entrance. Watching from the shadowed doorway she was surprised at what good shape he was in. A wide leather strap anchored his waist to the bench and his muscles rippled with each pull. Seeing him like this made her wonder how his ex-wife could say he was less than a whole man. Seeing him like this made her wonder why he didn’t respond to her teasing. 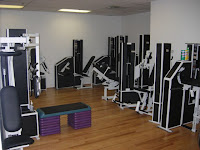 of reaction under the thin shorts. Annoyed at his loss of control, he took it out on her.

“This is my private time, go back to your room and stay there until your scheduled time.”

“I don’t think so, we have some things to discuss and now is as good a time as any.”

Gathering her courage, Amy went to him, kneeled at his side, and softly touched her lips to his.

“I couldn’t sleep for thinking about you. Wondering why you aren’t attracted to me, why you would rather spank me than make love.”

“This is a business arrangement. Would you be happier were I to treat you as a whore?”

“I’m sorry, Mr. Drake, I won’t bother you again. If I find you attractive it is my problem, not yours.”

“How many dollars does it take to make up for two good legs? Did you think a sympathy fuck was worth something to me? Maybe a bonus in it for you?”

His harsh tone and deliberate cruelty hurt worse than any spanking he had given. Tucking her chin to hide the sudden tears that threatened to spill she started to rise but found her wrists caught in a vise like grip.

“As long as you’re here I might as well get what I paid for.”

A touch of a button repositioned the bench so he was seated. Pulling her over his lap he started fast and hard bringing a sting to her bottom through the spandex that soon had her wiggling. Pausing just long enough to roll her shorts to her knees, she couldn’t catch her breath be

fore he started again on her now bare flesh. None of his usual pauses, no comments about how red she was getting, just hard, non-stop punishment. Soon she was sobbing, limp with total surrender. He realized he had punished her for making him want to break his own rules, and he had done so more harshly than she deserved. Her bottom was a deep red, mottled with purple, swollen and tender looking, and his hand hurt. Wishing he could take it back he gently rubbed her tortured flesh and tried to find the words to apologize.

“It’s okay, I am sorry I lost my temper. Just catch your breath and everything will be all right.”

The change in his voice was more than she could stand; completely drained from the emotional roller coaster she threw her arms around his neck and sobbed on his shoulder. Babbling her promises to be good, to try harder, to be good enough that he would like here a little, to never try to kiss him again.

He stroked her back and soothed her until the worst was over, but the heat of her burning bottom pressing against his thin shorts tortured him as surely as his hand had her. When she turned her tear stained face up to him he did what he had been thinking of since the first time he had seen her soft full mouth. The salt of her tears mingled with the sweetness of her mouth; instead of fear or disgust she returned his passion. RJ was lost.

Long moments later, twined together, he came up for air, caught a glimpse of their reflection in the mirrored wall and burst out laughing.

"I'm sorry, I didn't mean to make you do something you don't want to do." Amy started to rise, but he pulled back against him for another deep kiss.

"The problem was how much I wanted to, still do. I don't want you to feel like this is part of the package; you don't owe me anything but what is in our contract."

"This isn't about your damn contract! I find you interesting and attractive and I wish to get to know you better, this is NOT sympathy." Taking his hand she boldly slid it between her legs, the silk of her arousal was unmistakable.

"I surrender. But we're not kids, we have all of the time in the world, and this belt is cutting me in two. I'll grab a quick shower and meet you for breakfast in 30 minutes."

Smiling happily Amy tugged her tight shorts over her swollen bottom and headed for her room. She wanted to get ready for what promised to be a very interesting day.

~~~oo0oo~~~
I told you it just keeps getting better didn’t I? My anonymous friend is very good at this isn’t she? There are a few more chapters so keep coming back. I have also received a new story from a new writer and both Kaylynn and Florida Dom tell me they are writing. Now if I can get just a few more of you to try just one story. Give it some thought and send any stories to elisspeaks@yahoo.com
Posted by PK at 12:01 AM