There is a great Fantasy Friday up this week. Go back here if you haven't read it yet. You can still vote if you like. I will put up the reveal late tonight.

This is just a mild rant, nothing major, but the season just has me thinking about family in general. I have a large extended family. I have 25 aunts and uncles, at least 20 I was very close to. I never distinguished between my parent siblings and the people they married. They were all my aunts and uncles since the time I was born. I also have 29 first cousins. I am close to most of them too. In this whole crowd there is only one person that really annoys me. And that brings me to my Late Aunt Jay (LAJ). No she hasn’t passed away – she is just always late.

People who make a habit of being late really bug me. It is such a blatant form of p 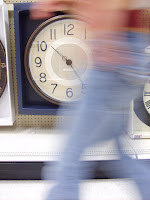 assive aggressive behavior. The chronic late arriver is plainly saying “My life and what I want to do is so much more important that anything you might have planned in your dull little life. We will be doing things on my schedule.”

Now my LAJ isn’t just a little late for family gatherings, dinners, etc. She is hours late. Sadly when I was growing up the gracious people of my parents generation insisted we wait on them and dinners, growing cold and congealed, were held until they arrived.

When I was about 18 my LAJ and her hubby invited the family over for brunch on Christmas. What time is brunch? Ten maybe, eleven? Maybe even as late as noon?? We got our first bite of food for the entire day at 5:00 PM! This repeated itself the next year (we were smarter and brought our own snacks that year). After that my sister and I refused to go and my parents agreed to give it up too.

I remember telling mom back than that one of my goals as an adult was to have a family gathering – invite my LAJ and hubby to lunch at 1:00 and eat at 1:00!

Year have passed and went we got married Nick and I began hosting the family reunions. We have hosted it 23 of the past 24 years. That first year my LAJ asked if she could bring anything (she rarely 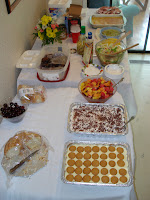 does now). I told her that would be nice, lunch would be a 1:00 and she could bring a desert. One o’clock neared and I put out the food and gathered everyone to eat. My mother said “Oh but you can’t eat before Jay and hubby get here.” I gave mom a grin and said “Watch me!” I would have served that meal on time if we had had to eat it raw! Shortly before 3 pm they showed up. She seemed slightly surprised that we had eaten but I told her to go on in and get a plate – there was plenty left, cold and congealed. It was perfect I was ready for more desert by then. LOL! She has improved over the years, usually only about a half hour late but the best part is now it’s her problem – the rest of us just go ahead with our time schedule and don’t give them much thought.

So that is my rant for the day, anyone can be late sometime – things happen – but if it is a way of life that's always going to bug me.
Posted by PK at 11:11 PM