You will be happy to know that I am putting up the third chapter of ‘Special Delivery’ this week. You can read the first chapter here and the second here. I have to really thank my anonymous friend for sharing this wonderful story with us. She has helped keep Fantasy Friday going. It’s nice to be able to count on a hot story to get our weekend off to a sexy start. I can always use more stories so if you are writing one send it to elisspeaks@yahoo.com
I hope everyone has a great weekend.

Special Delivery
Chapter Three
The ride home was quiet. Jane worried what he must think of a woman that slept wit

h him before even knowing his name. Ray pondered how to put her at ease. She directed him to the back of the shop where her private entrance was. Ray casually draped his arm over her shoulder as they climbed the stairs. At the door he tipped her chin up, thanked her for a lovely evening and kissed her, thoroughly, but with some restraint. Taking the keys from her hand, he unlocked the door and held it for her.

“Aren’t you coming in?” Jane asked, puzzled to find him still standing on her porch.

“Not on our first date.” He smiled and ran lightly down the steps, calling over his shoulder, “Do you like ice cream?”

Jane found herself alone, watching him pull away ruined all of the clever things she had planned to say about not wanting to rush this and waiting to sleep together until they became better acquainted. In fact, she found herself disappointed that he could just walk away so casually. Too keyed up to think about sleep she poured a glass of wine and paced the floor. The more she thought about it the angrier she became. It was her job to turn him down, just leaving her standing there was rude, especially after kissing her like he meant it. She would give him the cold shoulder when he came for her delivery tomorrow, that much was certain. Then, she would give him a chance to apologize. Having decided it was fair to be angry she headed toward bedroom just as she heard a knock at the door. Through the peephole she saw Ray, smiling, with two ice cream cones.

“What are you doing here? I thought you were going home.”

“Hurry up, these a 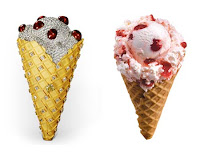 re ready to drip, hope you don’t mind, I had to take a couple licks off of yours to keep from making a mess in the car.”

Shoving a melting cone into her hand Ray sauntered in and made himself comfortable on the couch.

“Okay, now this makes it our second date. Should I leave and come back one more time to be respectable, or can I stay here and make out with my girl?”

Jane stared at him with delight, this was exactly what the hero in one of her favorite books would do. Before she could answer the ice cream she had forgotten slid off of the cone, landing on her chest and dripping icy trails between her breasts. Running to the kitchen Jane dropped the cone in the sink and grabbed a towel only to find Ray right behind her. Tossing his ice cream in the sink with hers he lifted her onto the counter and ran his tongue through the sticky mess as he unbuttoned her blouse.

“Now THIS is how I like my ice cream.” He teased as he gathered her breasts and swirled his cold tongue over her already puckered nipples. Taking the towel from her hand he wet it in warm water and gently washed her, trailing kisses over her breasts until she was breathless. “And this is what I have been thinking of all day.”

His hand slid under her skirt to find panties damp with desire. Kissing her deeply, he slipped the wisp of silk aside and stroked her until she moaned. When he raised his head he had to smile at the need written on her face.

“Can we go to the bedroom now?” Jane whispered.

“Not yet, I haven’t finished my dessert.” Dipping his head he slowly kissed the inside of her thighs until she was begging with need. “I’ll buy you new panties tomorrow.” Tearing the thin barrier to shreds he murmured, “Better yet, just don’t wear any.” before burying his face in her sweetness.

Jane lost all sense of reason, the universe contracted to the tip of his tongue as it slipped between her folds, swirling and licking until she cried out his name, her heels drumming against his back with the force of her orgasm.

Picking her up, Ray carried her back to the couch and settled her on his lap.

“Not bad for a second date.” He teased, nibbling her neck, and rolling first on nipple, then the other between his thumb and finger. He took his time, making sure she wanted him as much as he wanted her, when she vibrated with need; he carried her to the bed. Slowly undressing her, planting soft kisses on each inch of flesh he revealed until finally he covered her with his hard body. Poised at her entrance he felt her open for him.

“Tell me what you want, darling.” he rasped against her ear, barely able to restrain himself further.

“Oh baby, I want you. I want to feel you around my cock when I make you come.” He slid inside, deep and hard, pinning her to the bed until she gave him what he demanded. Satisfied, twined together, they held one another close. Talked about their day, chatting and relaxing, enjoying the intimacy. Ray hated to spoil the moment, but it was getting late and he would have to leave soon.

“So, does this mean you will forgive me?”

“For the horrid dinner with my sisters, or I should say sister. Debbie was her usual, quiet self, and Donna was her usual bitchy self. I really wanted you to like them.”

“Is that why you punished her? To make me feel better?”

“Hardly. She got what she earned, no more and no less. Why would you think it had anything to do with you?”

“Because you spanked me.,” she whispered, blushing furiously.

“I spanked you because you slapped me. Try it again and I will take a paddle to your butt until you can’t sit for days. Donna got exactly what I told her she would get if she was rude to you, plus she was already in trouble over smoking in school.”

“Why does it matter to you what happens to Donna?”

“I don’t want you spanking anyone but me, even if she is your sister.” Horrified at blurting out her true reason, Jane buried her face in the pillow and burst into tears, resisting his attempts to turn her to face him until he landed several hard swats to both cheeks.

“Look at me.” he demanded. “Now, tell me what you are talking about. You are jealous because I had to spank Donna, is that right?”

Through her tears Jane mumbled, “I wished it was me.”

“Tell me how it feels when you are getting spanked?”

When she failed to answer, Ray flipped her over and landed his hand with a crack on both cheeks. “Is this what you like?” Punctuating each word with a spank he asked her again and again until she admitted that she did.

Ray felt himself swell at the thought of spanking her just for the pleasure it would bring. His sisters were a chore, a responsibility that he had to fulfill. This was something totally different.

He had never thought of spanking as anything but an effective behavior modification tool until he had Jane over his knee, bottom bouncing and red, her squealing mixed with the sound of his hand cracking against her over and over. That image had kept him awake and hard long hours last night. The idea of her, in her bed, thinking about it too, was the final straw. He made sure her bottom was good and red before pulling her to her knees and sliding deep inside her again. The heat of her bottom against his belly coupled with the way she rocked against him as he drove into her brought them both to shuddering climaxes in moments. Holding her close, he turned, cradling her in his arms.

“We need to talk about this, Jane. I have never done anything like this before, but it feels right with you. Hell, everything feels so damn right with you it scares me.”

“Me too. Scared, I mean. I haven’t even been out on a date for a very long time.
And this is moving so fast.”

“Shush, don’t be scared, we’ll find our way together. As long as we’re happy and we keep talking, we’ll be fine. But I want you to know the spanking you got last night was a totally different thing from tonight. If you deserve a punishment you’ll get it, and I won’t make the same mistake I did last night again. If you have a punishment coming there won’t be any lovemaking until whatever it was is settled. I want to be clear about the difference.”

“But I don’t want the whole spanking, just the first part.”

“Then you better be good.”

Ray held her until she drifted off to sleep then slid reluctantly out of her bed and dressed in the dark. For the first time since his parents died he wished he didn’t have to go home to his sisters.

We have one more part of this wonderful story. I'll be posting it next week. After that there are a couple more all new Fantasy Fridays coming up. And I hope that there are more on the way.
Posted by PK at 12:05 AM