I’ve had several ask about my great-niece. She had her first brain surgery on July 6. The surgery was looking for the areas of her brain where the epileptic seizures originated. So 17 leads were placed in the brain and removed a week later. But this didn’t tell the doctors what they needed to know.

A second surgery was planned about six weeks ago, but when they arrived at the hospital they found out the surgery had to be postponed – covid had taken over the hospital.  So the second surgery finally took place about three weeks ago. This time they had to remove a portion of her skull, place a ‘mesh’ on the brain to continue looking for the parts that start the seizures. A week later part of the skull was removed again and the mesh removed so they could study the data.

Two areas were identified. One spot was the half the size of a man’s fist the other smaller, but in a ‘more difficult place’ as they put it. Surgery was done – I have no details. I don’t know if the places were removed, ‘blasted’ or what. But I know they were so very relieved when her dad spoke to as she was waking up and told her he loved her and she answered, “I love you too, Daddy.” A few hours late she walked to the bathroom.

I have no information about whether or not the surgery lessened the seizures, but I know the biggest problem for this little one was the shaving off of her beautiful long blonde hair. She says she’s so ugly now with no hair and the scar. What do you say to an eight year old (I hadn’t realized she was that old)?

Her mother is a part time photographer and decided to do a photoshoot of her. She told her while she was still as pretty as a princess she now had the scar of a warrior that would soon be hidden when her hair grew back – but that she would know it was there. A sign of the fierce warrior she had been as a child.

And with her mother’s permission here is her picture. 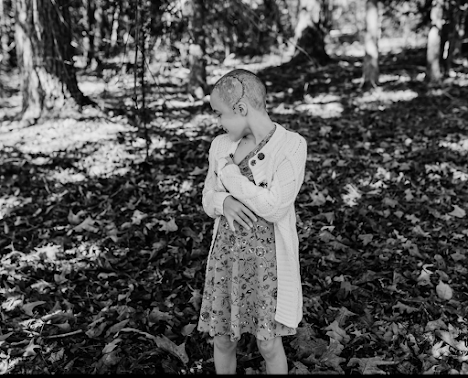