Searching for Home is live on Amazon! 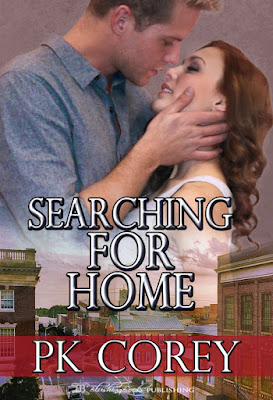 Wow! It’s out! Today was the original release date but I wasn’t even going to start checking until tonight. I got an email from a friend telling me it was out. Thank you V!

Searching for Home is the fourth in the Cal’s Law series, but the whole gangs in it. I love the friendships in my books as much as I love the spanking and love stories. I hope you do too.

Since you guys are my family out here I’m giving the two snippet I’ve posted over at The Reading Room. I hope these will get you in the mood to read!

The bastard had followed her! He'd come into her own home! The utter fury Allie'd felt since that morning seemed to surge into her right arm and she rounded on him. "You son-of-a-bitch! I'll kick your ass!" she shouted as her fist plowed into his face so hard, he went down. With her right leg raised for a well-aimed kick, she heard Ryan shout, "Stop, stop! It's me!"
"What's happening?" came a shout from the other end of the house. With adrenalin still surging, Allie tried to refocus. She knelt down next to Ryan, helping him sit up.
He had his hands pressed to his face as he let out a loud, "Ow!"
Allie heard someone shout, "What's going on? Who's here?" Then another shout, "Allie, are you okay?"
She looked up to see Cassie and Sue charging down the hall. Cassie was in the lead, but it was Sue who was holding Allie's cast iron frying pan above her head.
"What happened? Is he still here?" Cassie was demanding, shouting above the music. Allie, ignoring her mother-in-law, was hovering over Ryan. "I'm sorry, I'm sorry..."
"Stop!" shouted Ryan above the din. "Allie, turn off the damn music," he commanded, and she hurried to comply.
She came back quickly and knelt beside Ryan as silence filled the house.
"What happened?" Cassie asked for the third time. "Did someone break in? They're not still here, are they?"
Ryan got to his feet. "Sue, will you put that damn thing down before you kill somebody?" Sue lowered the frying pan but still looked around warily.
"I guess I should be glad Allie wasn't holding it," Ryan said.
Allie gently pulled his arm down from his face so she could see the damage. It was bad.
His eye was swelling fast and she could see the angry-looking red skin that would eventually develop into a serious black eye.
"You did this?" Cassie asked Allie in a stunned voice.

Jenny increased the suction, taking time to run her tongue around the head. She could tell when he was nearly at his limit to hold on and she released him to quickly climb on top. Taking full control, she impaled herself on his shaft and pulling up, she repeated the action.
Cal pulled her tightly against him as he rolled them both over. Jenny gasped as he pounded into her again and again. She began arching and straining, eager to capture every bit of him.
Jenny felt the orgasm shooting through her body moments before Cal shuddered with his own release and they clung to one another. Slowly Cal pulled out, keeping Jenny in his embrace. They lay together, recovering. No words had been spoken during the entire encounter.
Quietly, into the darkness Jenny whispered, “Cal, is that you?”