Many of you know I live in North Carolina. And you’ve probably heard we have a very unwelcome visitor coming. I’m well away from the coast but it’s starting to sound more and more like that’s not going to matter. I have lots of family and friends in the areas where they expect catastrophic damage. Since the storm is supposed to come all the way inland and cover Georgia, South Carolina, North Carolina and  Virginia, you realize there is nowhere close for anyone to evacuate to. 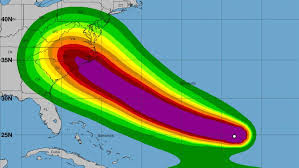 I can’t imagine packing everything you can carry into your car – a kid or two, a pet or two and trying to find gas to travel and a place to stay. All the folks having to get out have my prayers.

I’ve begun looking around our home. I’m very grateful that we cut six big trees from around our house last year. Unfortunately that still leaves three big one very close. Our last big storm was Hugh in 1989, LJ was just a baby. Since then we've had no big storms like this in the summer and no ice storms in the winter. Those two things take out some weaker trees and branches a little at the time, but it’s not happened lately so that problem could be significant.

Our biggest problem could be no electricity. I can live without lights, we have flashlights and lanterns. I can live without cooking, I'd be happy with chips and cookies for quite a while. No internet - that's harder, but I can read play solitaire with real cards and I could read an actual book if my Kindle battery goes dead. But air conditioning - now that would be hard to live without. No fan, no nothing. I wonder if I could sleep on a float in the pool?

When Hugo came through we were very lucky. We were only without power for about nine hours. Some of our friends were without for more than two weeks. I don’t really know how to prepare for that. We don’t have a generator and we haven’t needed one since 1989 so I don’t know if it would be that great an investment, but I wouldn’t mind having one now. 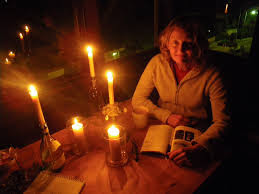 Being the worry wart I am I also worry about Mollie’s property and she only rolls her eyes when I give her suggestions for being prepared. Yes, I might get to tell her ‘I told you so’, but I’d really rather she just listen.

Since I probably won’t have internet access, I’ll text some friends and have them let folks know we’re alive and well. But if you have some prayers to offer, the my state and a few others could sure use them.
Posted by PK at 6:00 PM