A hard spanking and how I feel about it

Where to begin? I told you I’d emailed Nick my desires and I’d ask for him to commit to spanking me once a week until at least Halloween. I just wanted to see if it would help as much as I thought it would. One of his intriguing comments was, “Lets commit until Spanksgiving. LOL, suits me!

This was the email I got from him last Thursday:

I think you have done a great job of simplifying things so that even I can grasp the basics, even if I don't understand everything.

You want, or at least think you want, me to spank hard at least sometimes.  And you want to be able to let go, to yell to plead or whatever.

I think I can make efforts on the first, and I think it might be hot to see some animated reaction, like the errant young ladies on the spanking videos.  I do wonder if you will be able to drop your reserves enough to get to that point.  Or will you find that this doesn't feel nearly as good on the backside as it did in your head and have to bail with a safe word? I guess we will be getting some answers as we go.

Shall we all say it together – ‘Be careful what you ask for.’

So Friday, after Mollie had been by to say hello and headed back to school, after we’d gone out to eat, Nick told me to pick out a couple of implements and meet him in the guest room (I wanted to use a different room from our bedroom). He said since I’d had a good week working on healthy objectives was the reason I got to pick.

He asked me if I needed any restraints on my hands so I wouldn’t reach back and my only thought was ‘gulp’. I told him no, hoping it was going to be true. I’d explained to him in my email that I wanted to start off with my clothes on, because I did want a hard spanking and I was afraid I couldn’t take it directly on the bare. So I was a little surprised and disappointed when his first statement was, ‘Pull down your pants.’

But I did as he asked and after I did he told me I could pull them back up. Bewildered I looked at him. “I just wanted to see if you’d added any extra padding.” I had to laugh because I’d thought of doing that exact thing! I had wondered if five or six pair of panties would help. I didn’t try it, but it could have come in handy.

With me dressed again he started spanking. He began firm and it did get harder – and harder. Again, I’m usually quiet when I’m being spanked. I think Nick and I both realize that the ability to ‘let go’ – yell, cuss, plead – under his hand would be a really good thing for both of us. Ultimately crying would be my goal, but I can’t see it happening.

I did manage to be a bit more vocal. A few ‘shit’, ‘damn it’ and ‘that hurts’ not exactly letting go, but an improvement for me. Then he did something else I’d asked of him. He had me take my pants down then and he left me alone for a little while. I sometimes want to give my head a few minutes to catch up an appreciate/accept what’s happening. While corner time is fine in my head, I don’t think I’d like in much in real life. But lying there across the bed, knowing he was soon coming back for the second half of the spanking was doing amazing things in my brain. 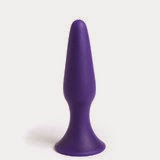 When he came back in with a touch of hot cream and a plug everything jumped up a notch. I was again spanked thoroughly and I found myself hugging the pillow for dear life. It was quite an afternoon, and he did it for me – just for me. I mean ultimately having a happier, healthier wife benefits him too - but not at that moment and I felt very loved and cherished. When he was done he gave me a wonderful hug and told me to leave the plug where it was for thirty minutes.  Delicious submissive feelings were snapping through my brain and I loved it.

I want to say two things that I know for sure –

First, I hated that/those spankings. They hurt and I didn’t like it one bit. It does feel much better in my head than on my behind and I wanted him to stop. The pain was serious and I didn’t want any more.

And second, when he was done, I felt the best I have in months. I felt relaxed, happy, loved and cared for. Sitting afterwards – plug still in – on my sore bottom was an experience. I’m not used to being sore after a spanking, but I was after this one. I even have a few small bruises, enough to make me happy without scaring Nick off. My mind continued to zoom happily around for the rest of the evening.

I'm curious to see what will happen when I come home one Friday in foul mood. One of my leave me alone and don't come near me moods. One of my 'Fine - whatever' moods with the attitude of 'I don't care if you spank or not, you're not getting a reaction from me' mood.  I hope Nick will be willing to see that for what it is - a way of distancing myself from him rather than leaning on him. I could see on those day needing more time in my head - time before any spanking and well as time during the spanking - to think and acknowledge what I'm doing and hopefully correct it. I hope we'll both be able to break through those moods - him with a firm hand and me will a willingness to be brought back from wherever I'm trying to escape to.

After the spanking Friday we talk a little. He say I still need to work on letting go, but that I will have plenty of opportunity to practice. As he put it, “You let the genie out of the bottle.”
Posted by PK at 6:00 PM