Talking with my sister, finishing up

I guess this was a three part conversation you can read part one and part two if you like. 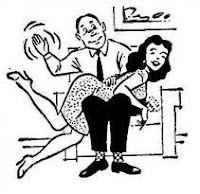 As my sister and I talk on she finally asked “So this whole spanking thing is just a sex game?” With the few real life friends that know about TTWD I’ve let them believe this. I let my sister believe this up until this conversation. It’s a good place to leave it with your vanilla friends. They can understand a little slap and tickle foreplay. They’ll probably giggle and tell you you’re crazy, but most adults will understand that when it comes to foreplay, to each their own.

The next one can still be considered a game for us. One Nick won’t play nearly as often as I’d like. It’s a kind of mock discipline. It fulfills my old fantasies and desires, almost more like roll playing. I would love to be spanked more often. Let’s take our laundry dilemmas for example; this is the way the game would go . . .

Nick come home to clean, day old laundry still not put away and a pile of my discarded clothes at the foot of the bed. He’s not really mad, but he wished I’d just take care of it. Normally he would ignore it or maybe point it out (which I find a little irritating, I know it’s there. I have eyes. But it’s not really bothering anyone so let it lay there.) What I’d like is Nick ordering me to the bedroom; hand on the bed to wait for him. He comes in and I get a good spanking – not 4 or 5 swats, but a real spanking. As he finishes he tells me, “I’ll be back for the second part of this spanking in 10 minutes. Depending on how much of this is put away and how good the room looks will help me decide if you can keep your pants on or if the next one will be on the bare.”

This is not discipline! This is turning a dreary, mundane chore into and exciting, fun interlude for me. Something along these lines could work for so many little things like emptying the dish washer or even exercise. Imagine him saying, “Didn’t exercise at all yesterday, then today you can wii for a half hour wearing a plug, think that will help you remember?” LOL! This is the dominance I want. Between the two of us. we know it’s a game for the fun of it. And this would be FUN! Things like this can spice up a marriage of nearly 30 years. It hardly takes any effort on his part, but he seems to do it once or twice when I mention it, then he forgets.

And the third type of TTWD, the hardest to explain. There are times I need a spanking to bring me back. This happens less often than it used to, but sometimes I feel really disconnected from Nick and I began to feel depressed. I’m angry with no specific reason. I begin answering Nick’s questions with one or two words. I’m drawing away and going deep into myself. I’m tearing and sad. Sometimes it’s over stress at work, more often its non-specific. It’s at times like this that I need Nick to spank me for reconnection.

Now honestly picture this poor, sweet, vanilla husband - raised in a normal vanilla world to be a gentleman. He was taught along the way that when his wife was unhappy he needed to be sweet and loving and understanding, and of course he was taught NEVER to hit a girl. So he comes home to a distant, angry, depressed, teary-eyed wife. Is his first reaction is going to be “Hmmm… I think I spank her ass until she cries and can’t sit down.” How crazy does that sound?? But for me it’s what would most likely work!

I know this would take some guts on Nick’s part. But when I first came out I gave him permission to spank me anytime, anywhere if he thought it might help. I wouldn’t suggest every woman give her husband this complete free hand, but it was safe for me to give it to Nick. So even if I wasn’t ‘in the mood’ or didn’t really want to be spanked right then, he still has my permission. I really think whether or not I thought I wanted to be spanked at that moment, it would help. I know the fact that he tried would help.

I didn’t give my sister all the details I’ve shared here. I gave her the basic, but I wanted to get it all out here for myself and I hope Nick will read this too. I’ve told him this before but it’s important enough to say again.

My sister had one last question; she asked “Can I read your blog?” I had to give that one some thought, like maybe a half second. The answer is “NO!” Even though I know I have lots of readers here, this place is still like a journal and I’m not ready to share that with her. I appreciate all of you who have come by and read this conversation with my sister. She and I will continue to talk I’m sure. If anything interesting I’ll let you know.
Posted by PK at 4:16 PM