A happy Valentine's Day to all
Continuing the talk with my sister,

She didn’t think much of the idea of dominance and she liked the idea of submission even less, which I fully expected. But I shared more with her. I wanted her to realize just how much the idea of dominance had changed my life. I'm not submissive, not really, but there are times I like to play the part and it's made my life much better. Those of you who had no sexual hangups might not understand, but I was trying to help my sister understand why I needed this.

When I go back and think of my childhood, I have only the most loving memories of my parents. They were good people and they loved us kids dearly. Buy they were older than the parents of most of my friends, my mom was born in 1919! So her view of ‘proper’ were clear. Parents didn’t talk to their children about ‘s-e-x’ that much. I knew the basics. I was told what to expect during puberty, and I was told that good girls did not have sex until after they were married. What I wasn’t actually told, although somehow this seeped into my way to thinking, were my mother’s real beliefs about sex. This was, that sex was something a woman had to endure in order to bear children. 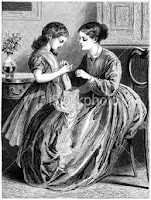 So there I was with this thought buried somewhere deep in my mind, and coming to age in the 70’s – the birth of the sexual revolution. During those years some significant events occurred. Penicillin was in wide use and could cure you of the STD’s of the time, the pill was developed and if you were still careless, abortion was legalized. Add to all that that ‘everyone’ was doing it and there were few stigmas or reasons for embarrassment, I sometimes felt like the last virgin on earth.

I didn’t hold with my parent’s beliefs that you had to be a virgin when you were married but I didn’t believe in casual sex either. I waited until I fell in love. I was 24 years old but I waited for Nick and I’ve never regretted it. I do, however, wonder if Nick wished I’d had a little more experience. I know I wasn’t a very good sexual partner. I’m sure it had something to do with some of my mother’s feelings that were lingering deep down. Without consciously thinking about it, I guess I believed sex should be in a dark room, you should only take off the clothes that you had to, missionary position, and don’t touch anywhere you don’t have to – just call me the party girl!!

My big secret was that I knew the only thing that turned me on was spanking and I had no intentions of sharing that weird little piece of information with anyone!

But I finally did, took me too damn long, but I did. When I opened up to Nick, our world really changed. It was a mental thing but for me it was like flipping a switch. The more dominate Nick was in the bedroom the more opened I was to trying anything and everything. The part in me that was saying “nice girls don’t do…” was easily shut up by the thoughts “He’s spanking me. He’s the one in charge. I have no choice. I have to do what he says.” Yes, I know it was a mind game but it was one that worked!

I’m happier, Nick’s happier. His dominance in the bedroom simply shut off any and all of my hang-ups. We have enjoyed every aspect of sex play that either of us has ever wanted to try. The change from our early marriage is so complete no one would ever believe it. We enjoy toy shopping together, not only spanking implements – although we have many of those, but we’ve acquired many other toys along the way – vibrators, plugs, lotions, cuffs anything that catches our eye.

I’ve got one more post about our conversation.
Posted by PK at 4:16 PM