I’m very excited about this week’s Fantasy Friday. Some of those of you who have been reading here in blogland the longest remember a very special blogger – CeeCi, who wrote Giardino del Piacere. CeeCi was and is someone I consider very special. CeeCi and Eva (Nothing Random) began blogging not long before I did. Grace was an old hand at blogging by that time and we all became close. So close in fact that in 2008 we traveled from our various parts of the country to meet in person in LA. We even blogged together about the trip over at LA Kink. Being able to all be together along with the men we love was as amazing experience as I can imagine.

CeeCi hasn’t blogged in a while. Real life seems to be keeping her plenty busy these days. I was happy to get an email from her last week. I always enjoying hearing from her but she included a bonus this time, she sent several of her fiction stories. No one writes quite like CeeCi. This first story is in two parts and I’m not even going to make you wait a week for the second part. Part two will be up tomorrow.

No Angel
Fine! Go! And fuck you!" Angela Joy hurled the last insult at Matt's back as he headed out the door. 'Asshole!' she thought to herself. 'Good bye and good riddance...waste of time!' She crossed the living room in three angry strides, flung the door open and yelled, "I hope you rot in hell!" She slammed the door with enough force to rattle the apartment windows and send the cat diving under the sofa for safety.

Suddenly, the tears came. Hot and painful, her throat clenched, her heart clenched and she collapsed to the floor in a bout of hysterical sobbing. Another one, gone. Another one, not man enough to understand her. Another one to desert her. Her wailing sent the cat running from the room. Misery kept her on the floor for many minutes, until her sobs became quieter and her tears gave way to hiccups.

"Crap!" she muttered and got up to make her way to the kitchen for a glass of water.

**********
"Your total today is $36.42." Angela Joy looked at the customer taking up space in her check-out with boredom and an air of contempt. 'Slow, old woman,' she thought, 'just gimme the stupid coupons and get out of my line.' The customer finally obliged and Angela began ringing up the next shopper in line.

"I have a carton of water in the cart," said a pleasant, masculine voice.

Angela Joy looked up, ready to retort that she'd noticed it, did he think she was a moron or something? The words caught in her throat as she gazed into the sexiest, darkest brown eyes she'd ever encountered.

"Um, yeah, thanks...I got it," she told him. Everything seemed to come to a halt. The ringing and beeping of the other registers faded away. The noise of unruly kids vanished, no rattling carts, no hum from the coolers at the back of the store, it was just the two of them and Angela Joy was smitten. As she gazed at the man her hands slowed and then stopped.

Angela Joy snapped out of her stupor and began sliding the remaining items across the scanner. Her thoughts quickly turned to finding a way to introduce herself to the handsome hunk standing in front of her.

"Angela Joy," she stated. "My name is Angela Joy, not 'Checker.' I'm sure you have a name too, other than 'Customer.'"

"Larry. Nice to meet you Angela Joy. I've been shopping here for a while and this is the first time I've seen you working here. Are you new?" he inquired.

"Yes," she told him. "I just moved here from Granston. I needed a change of scenery and so far I'm liking the view around here." She bestowed her most inviting and flirtatious smile upon him. "I'm a bit lonely though, being new in town and all. I hope that I can meet some nice people working here."

Larry was not immune to her charms. He was single again after many years in a decaying relationship. 'No time like the present,' he thought and took a giant leap, one that sealed the fate of two lonely people.

"Want to get a bite to eat with me tonight?"

The dinner lead to another dinner, which lead to more time spent together. Angela Joy was on her best behavior when she was with Larry. He was handsome and witty and generous. He showered her with little gifts and treated her with respect. He frustrated her because he was so old-fashioned. She took delight in teasing him about wanting to wait until they knew one another better before moving their relationship to a more intimate level. Angela Joy wasn't used to waiting, but Larry wouldn't change his mind. 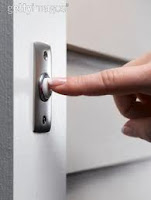 Dressed as seductively as her checker's income allowed, Angela Joy arrived at Larry's house a few minutes late. Making him wait seemed like a great way to get his attention. She sashayed up the walk way and rang the doorbell. As she waited she looked around her, admiring the neatly trimmed yard and the freshly swept sidewalk. When her summons went unanswered, she rang the doorbell again, holding it a bit longer to be certain Larry knew she was waiting. Her attitude was beginning to shift from sexy and seductive to perturbed and pouty.

Larry opened the door to find a changed Angela Joy on his doorstep. "There you are," he said. "I was beginning to get worried something had happened. You're 20 minutes late."

"Yeah, yeah," Angela Joy muttered as she flounced into the house. "I'm here now, so chill."

Larry wasn't too pleased with the attitude, but decided life was too short to let a little bit of bitchiness spoil the evening. "Come in to the kitchen," he invited his guest, "I was just getting ready to pour myself some wine. Would you care for a glass?"

Angela Joy followed him into the tidy room and seated herself on a stool at the breakfast bar. "Oh. Chardonnay. Yeah, I guess I can choke some of that down." As she reached for the wine glass, Larry pulled it away from her.

"It'll do," Angela Joy replied and reached for the wine again. Larry did not extend the glass towards her. He was confused. Who was this woman sitting in his kitchen? The last time they'd

been together, she was sweet and filled with laughter. Tonight, she was surly and acting as if her presence was some sort of a sacrifice. He'd hoped the evening would be the night the two of them finally moved their friendship to the next level. He was ready for a relationship with Angela Joy, but not with the woman seated across from him.

Angela Joy was becoming annoyed. 'Is he going to give me the damn glass or not?' she whined internally. 'Asshole, don't tease me, don't play with me.' Her lower lip moved out of its own accord and she crossed her arms in a huff.

"Whoa!" Larry exclaimed. "What flew up your butt?" He laughed as Angela Joy fumed.

'So much for seductive,' she thought, 'I wouldn't do him if he had the last cock on the planet.' She leapt out of her chair and stormed down the hall making her way to the front door.

Tomorrow the second part of the story will be up. Please come back.
Posted by PK at 12:05 AM