So happy to tell you we have a brand new Fantasy Friday today. Up until yesterday we were looking at another repost. I think reposts are fine, they’re new for many of my readers. However, I love to be able to post new fantasy stories. Today’s story is from my friend Mary. Mary has written for us before and you can read her other Fantasy Friday stories here and here. So on this cold Friday (for everyone except Grace) I hope you will enjoy this hot story.

New Year’s Resolution
“You ready to go jogging?” Rob asked just as Liz had made herself comfortable on the couch, snuggled with a blanket and the remote.

“But it’s cooooold outside!”

“It may be January but it is 55 degrees. I don’t think you will freeze. Now, hop to it.” Rob emphasized the last comment with a swat to her backside as he pulled her up off the couch.

Ten minutes later Liz came sauntering down the stairs, still grumbling under her breath….something about stupid New Year Resolutions and why did he have to choose today of all days to decide to enforce them, when she had obviously made prior plans with a blanket and the couch all afternoon.

“Cheer up. A little run and fresh air will help you feel better and you’ll be proud of yourself for sticking with it.” Rob was still trying to encourage her, but she gave him a pouty face.

They headed outside and started jogging down their street. Now, Rob is an

Army Captain and takes an annual PT test, including a 3 mile run. His PT test was coming up the next month, so he planned on running a full three miles. Liz is not a runner by any stretch of the imagination, but she had resolved this year to intentionally exercise at least three days a week. Rob had now decided that it was his duty as HOH to enforce her resolution. After they jogged about a half mile down the road, Liz was huffing and puffing and obviously struggling to keep up.

“You’re doing great, sweetheart. Why don’t you continue walking along our road at a brisk pace while I run ahead and finish out the three miles. You can try to jog a little more once you catch your breath and I’ll meet back up with you in a little while. Remember, you need to keep your heart rate elevated for at least thirty minutes for good cardio health.”

Liz couldn’t believe her ears. He was leaving her to continue walking at her own pace. She was almost giddy with excitement as a plan began to hatch in her mind.

“Ok honey. That sounds good. Have a nice run.”

“Alright. Try to build up your endurance a little bit. The more you work at it, the easier it will get.” He gave her a gentle kiss on the top of her forehead and jogged off in the opposite direction.

Liz started walking down the road, but kept glancing over her shoulder, checking to see when Rob turned the corner off their street. As soon as he was out of sight, she began sprinting back home. She knew the three mile route he was running and that it would be about 30 minutes before he turned back onto their street. Not enough time to watch her movie, but she could at least check facebook and any blog updates. 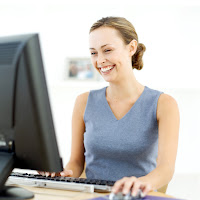 Once inside, she made a beeline for the computer and quickly glanced through her recent updates on facebook. She commented here and there on some status updates and then checked her blogroll for any new entries. She started reading a new story by one of her favorite bloggers and then one of her friends opened up a chat window with her. They started chatting and Liz quickly lost track of time.

As Rob turned back onto their street, he looked up and down the road for Liz. Not seeing her on their road, he turned back onto the street behind them and then around another corner. Still looking, he came back another way through several more of their neighborhood roads. Still no sign of Liz. Getting a little worried, he ran back toward the house. His neighbors were outside taking down Christmas lights and he asked them if they had seen her walk by recently.

“Oh, yeah, she jogged by us probably 30 minutes ago. Looked like she was headed home.”

Relieved, but anger starting to set in, Rob thanked his neighbor and sprinted home. He had a sneaking suspicion as to his wife’s whereabouts so he quietly slipped through the back door, stopped by the bedroom for a minute and then walked into the kitchen, finding Liz sitting at the computer desk. Her back was to him, and she was so engrossed in her chat conversation that she had not heard him enter the house. Rob quietly moved forward, gripping the wooden paddle in his right hand, getting close enough to read the computer screen.

“I gotta run. Rob will be back soon. Can’t let him find me inside. ttyl”

Liz pushed herself out of the chair, leaning forward slightly on the desk, with her hand on the mouse, ready to shut down the computer, waiting to see if there was a final response from her friend before planning to dart back outside.

Before Liz knew what hit her, there was a sudden, loud, and hard CRACK impacting her perfectly positioned backside. Liz screamed and tried to run away just as Rob grabbed her arm and pulled her across his knee.

“Where are you headed in such a hurry?” Rob questioned.

“I was just….just…getting a drink of water. I was about to go right back outside” Liz stammered.

“Really??? Is that why the neighbors saw you come home over thirty minutes ago? And is that one of your spanko girlfriends you were chatting with? You can let her know that you just got busted. And let’s just check your facebook while we’re at it.” Rob knew her too well and Liz knew she was busted as Rob scanned through her chat conversation to discover it had lasted for a good twenty minutes and she had made comments on facebook over thirty minutes ago.

“I’m sorry! Really, I am! I only meant to stay inside for a minute, but I kind of lost track of time.”

Rob peeled down her shorts and began his lecture, punctuating each sentence with a hard pop from the wooden paddle. 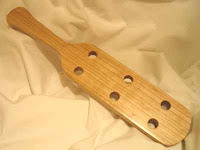 “Yes, I know you are sorry. (smack!) You’re sorry that you got caught! (smack!) You had your little plan to get back outside before I got back, but you did lose track of time, by over thirty minutes!” The spanking really began now, as Rob thoroughly applied the paddle all over her upturned bottom and upper thighs. “Do you know how worried I was when I turned back down our street and there was no sign of you? I ran five more blocks through the neighborhood searching for you before I asked the neighbors and found out that you deliberately disobeyed me! And now, now you want to try and lie yourself out of it?!?!?” Rob then applied ten more hard smacks directly on Liz’s sit spots, alternating between each side.

Liz was a sobbing mess. It had been a long time since Rob had disciplined her, and she now realized how childish she had acted. She had disobeyed her husband and caused him undue stress and worry. She knew she deserved this spanking, but the pain was becoming intolerable. She was screaming as he paddled her sit spots. Then, as suddenly as the spanking began, Rob pulled her up and embraced her in a bear hug. Liz was relieved to hear him say, “I love you.” But then, the next words out of his mouth were, “Now, as for you losing track of time, I’m going to teach you exactly how long thirty minutes is. You are going to go stand in the corner, as you are, for a full thirty minutes...no rubbing.”

Liz was mortified. Her shorts and panties were down around her ankles, her backside was red and 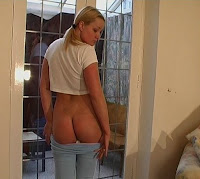 throbbing and her face was tear-stained. She started to protest, but then saw Rob tapping the paddle against his palm with a nod toward the corner. She knew that she was in no position to argue right now, so she slowly shuffled her feet over to the corner. The following thirty minutes seemed to last an eternity. The coolness of the air against her burning backside created even more of a burning sensation and the temptation to rub was greater than ever, but she had a pretty good feeling that Rob was watching her every move and that he had not put the paddle away yet.

After what seemed to be an eternity, Rob finally said, “Ok, you can come here now.”

Liz immediately began rubbing her sore bottom and shuffled toward Rob for another hug. He gently rubbed his hand over her warm bottom and gave her a little squeeze before saying, “Alright, young lady, pull up your shorts. You’ve got a thirty minute work-out ahead of you. Outside.”

Liz started to protest again. “But you can see how red my thighs are! It’s obvious that I was just spanked! I can’t go outside like this!”

“Guess you should have thought about that an hour ago when you decided to disobey.” Rob helped pull up her shorts and then nudged her toward the door with a tap of the paddle.

~o0o~
Mary, thank you again for helping out with Fantasy Friday. I sure hope you keep writing. And as always everyone is invited to send stories! Send any contributions to elisspeaks@yahoo.com
Posted by PK at 12:05 AM