Yes we have a Fantasy Friday for today and it is a wonderful story. But I have to admit that as most things are on this day after Thanksgiving this is a leftover! Yes this is a rerun of a very early Fantasy Friday. I know that there are new readers all the time so this will be new for many of you. I will even have voting at the end – a little memory test for some of you!

There is a reason we have a leftover today guys, I don’t have any more stories! I really, really need some. You have to write them folks! I know it’s a busy time but I am hoping some of you have one in the works. I you do send it to elisspeaks@yahoo.com

Playing game
All of this started with one stupid phone call from the husband of a friend.

At the time all I could think of was “Why didn’t he just mind his own business and stay out of mine?” 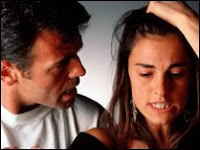 “Kevin called”, Byron informed me as I came in the house, “why didn’t you tell me that you and Hannah got wasted and then you rode home with her in that condition?”

“Oh for Pete’s sake,” I snapped, “Kevin is a big mouth. Nothing happened, we’re fine. Just drop it.”

“You go out drinking and you ride home with someone who was drunk at the time and you want me to drop it. I’m going to blister your butt!”

I was stunned at this statement! We had been spanking for several months but it was all in fun. We had made up some rule I was to follow. Mostly silly things, but I knew Byron didn’t really take it seriously. I couldn’t believe he was saying this. But I wasn’t in the mood to go along.

“So in spite of everything you’ve been saying about me being HOH and how you want discipline in your life you are the one who sees all this as a game. You even wrote all the ‘rules’ you are suppose to go by. Well I have been doing some thinking myself.”

Susan was surprised to see that Byron looked dead serious. He went on “I am the head of this house and tonight you are going to realize that fact. I don’t plan to run your life. But when you act this crazy and put your life as risk then I am going to have something to say.”

I wasn’t going to listen to any more of this and went to the bedroom and shut the door. That is my signal that I want to be alone and I was pissed when Byron followed me.

“Susan this IS going to happen but first you are going to stand in the corner and think about why you felt in necessary to put you life in danger.”

“Are you out of your MIND? I am NOT standing in any corner! That is the stupidest thing I have ever heard of! You can forget it! It is NOT going to happen!”

Byron was much too calm when he said “Actually honey, it is.” Before I even realized what was happening he had pulled me over his knee and held me. That wasn’t easy because I was mad as hell and I was fighting him hard! I felt him reach over to his night stand and grab the hairbrush and quickly began spanking me fast and hard! Never had he spanked so hard! It hurt like hell!!

I kept yelling “Stop Byron! That really hurts!” Always in the past that would have ended the spanking but he was acting like he couldn’t even hear me. When he let me up I couldn’t stop rubbing.

“Damn it”, I snapped “that hurt! What the hell is the matter with you?”

“You always tell me a spanking is supposed to hurt, so I guess I am doing something right. Now you are going to the corner.”

I was about to continue my protest but I needed time to think and at this moment the corner seem as good a place as any. Fine, whatever! I thought to myself as I stomped over. I was still stunned by this whole confrontation. But not as much as I was when Byron’s next words were,

“Pants down, panties too.”

I exploded! “You have lost your fucking mind!” I screamed at him. Big mistake. He grabbed me around the waist and with one arm yanked down my sweats and panties! Then without a word he once again sailed into my sore ass with the brush!

It was at this late point in the confrontation that I realized, for the first time, that I really wasn’t in control. I had pretended before that he was in control but it had never really been true. I knew I had always had the power to stop anything I didn’t want.

With one last smack that sounded like a gun shot he said sternly “Not one more word and don’t move one inch out of that corner.”

My head was spinning, my ass was throbbing and my mind was racing! What had set him off, what was going on? I couldn’t believe all this had started because I had ridden a few miles with Hannah when she was a bit tipsy! But then the thought occurred to me – what if one of the boys had done that? Hadn’t I warned them both a million times? What if Byron had put himself it that kind of danger? The seriousness of what I had actually done began to hit home.

I had probably been there about 20 minutes when Byron returned. He called me over to him. “Have you had time to realize what you did, what could have happened, how devastated the boys and I would have been if something had happened to you? Do you know what you risked?”

I did know, I really did. “Byron I am so sorry. Never ever will I do anything so stupid again. I really do know how serious it was!”

“That’s good honey. And in a minute you are going to realize how serious I think it was.”

“But, but… you just spanked me! What do you mean?”

“Susan I spanked you for not going to the corner when I told you to. Now you are going to see how I feel about you riding with drunks!” 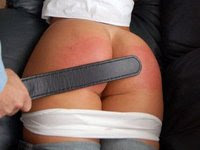 With that I was over the end of the bed and my ass was on fire again with the first stroke of his belt. I knew I couldn’t take much more. My safe word played around in my head but as much as I wanted it to stop I just couldn’t say it. The belt felt like it was searing my butt each time it landed! But at this time, for this offence I knew it was not a game we were playing and I wouldn’t say the safe word! My hands were dug into the bedclothes as if I were holding on for dear life.

Finally it stopped. I lay there sobbing as Byron gathered me in his arms and held me. He whispered quietly in my ear how much he loved me and how important I was to him. He had me roll over and very gently rubbed lotion on my burning bottom and thighs. I was amazed that anything could feel so good and hurt so much at the same time.

I slept then. When I woke I did so slowly. Shifting position I winced and clarity came to my mind. Byron was lying beside me.

I smiled back “I’m good” I answered. And I was, I was as good as I had ever been! I couldn’t believe that Byron had really cared enough to take charge as he had. I was still stunned!

Okay you have done your reading now do your guessing. Remember this is a blast from the past! Was it written by my twin Eva, or me (PK), or Grace or Reesa (Roberts)? You can go back and check out each of these blogs to see if you can identify a style. Vote and then I will post the answer here by late Sunday night.

I found some of these lovely pictures at American Spanking Society. Thanks Todd and Suzy!

I want to let you know the author of this weeks Fantasy Friday. You can click here if you haven’t read it yet. The voting was very close Grace got 13%, Eva 25% and Ressa and I each got 31%. Adam thought it was Eve – he was close, it was her twin. Yep, I wrote Playing Games. Do you see what you folks are doing to me?? I am reduced to posting my own old stories. I am not great at fiction but I love to write when I get the chance. There is one more story in the cupboard for next week then it will be empty again. Keep writing folks and send your stories to elisspeaks@yahoo.com