The truth about truths and lies 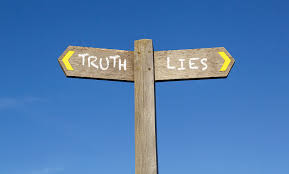 1.     I bought a house for myself when I was twenty-four years old.

I did buy my own house at the age of twenty-four. I was renting a nice place but after two years there the land lady said no pets. My cat was my child so I decided to buy her a house. I found a three bedroom, one bath house. Large kitchen,  a dining room and a nice living room with a fireplace. It was on ¾ of an acre. And get this, it cost a whopping $28,500! I had saved hard forever, but I knew I couldn’t really afford it without a larger down payment to get the monthly payments down. Then my parents and my sister each contributed some for a down payment. I was still on the fence when I accidently ran into the owner. He offered to carry a second mortgage for five years. And I snapped it up. I lived there until Nick and I married two years later and we lived in his house. We rented mine out for a year or so and then, when I was pretty sure our marriage would take, we sold it.

2.     I grew up on the same street as my elementary school and my high school.

This one is true, too. I love my small southern town. I could see the elementary school from our house and it was always my playground. Then less than half a mile down the road in the other direction was the high school. We always walked to the Friday night football games. They eventually built a new high school and turned my old high school into a middle school. That’s where I taught for thirty years.

3.     My best friend when I was a child was a boy. We never could understand why our parents wouldn’t let us spent the night at one another’s home.

Nope, not true. Cathy was my best friend and we slept over all the time. I did have a lot of guy friends, but I guess instinctively we knew our parents wouldn’t approve of sleep overs.

4.     I lived for two years in an apartment with three other girls and twenty pets.

True! This was during college. I guess in this large apartment – the upper floor of an old house the four girls wasn’t a big stretch. But we were all in a program to become veterinary technicians. So we had our cats and then we took in a two dogs with pups, and then a cat with her litter. I actually think it got over twenty pets at times.

False! Several of you were right on this one. Nick has been my one and only!

This is true. My parents were big travelers. Dad especially love it. They took us on a trip to Spain when I was thirteen and one day on that trip we flew over to Africa and we toured the Casbah in Morocco.

This was fun. I hope it gave you a few minutes of distraction.
Posted by PK at 8:00 PM