This story is talking about shopping - maybe you'll get some Christmas ideas.

Unlike some, this is a fairly short Fantasy Friday and one of my favorites - because it was written by Nick, well with a little help from me. I am married to a man of many talents. He sent this to me years ago and said that I could punch it up any way I wanted to so I add the wife's part at the end. Nick and I make a great team!

Since my wife, Dawn, came out as a spanko I’ve had many new experiences

to understate the obvious. One interesting evening involved a little shopping trip for a birthday gift. Never before did I go birthday shopping at the nearest ‘adult store.’ My wife had been hinting that she wanted to try a new ‘spanking toy.’ It was with some misgivings that I entered the store in search of the new spanking implement. I scanned the fellow shoppers and was relieved not to see any familiar faces. I wandered around trying to discretely scope out the possibilities while being invisible.

I saw a couple of interesting possibilities and was wondering about the relative merits. One appeared to be a leather paddle while the other was more strap-like with a handle. I was lost in thought and imagining the proper use of the items in question when suddenly I was shocked to hear someone right behind ask, “May I help you?”

I haltingly tried to explain that I was something of a beginner to these things but was trying to find something appropriate for my wife. The shapely clerk was all smiles as she said she was certain that we could find something that my wife would enjoy. But how to make the best choice?


The clerk told me her name was Kristin and that she loved seeing customers find something to spice up their lives, and asked what characteristics were important. I couldn’t believe I was carrying on such a conversation as if I were shopping for a pair of shoes.

I swallowed and managed to say that I like a good sound but a good sting seemed to be desirable for my wife. Kristin heartily agreed and said the two items I was looking at were both great choices. It sounded like the voice of experience.

She then took both items from the rack and asked me to follow her. She led the way through a doorway behind the counter telling her fellow clerk she had to step into the storeroom for a moment. When we got to a secluded corner of the storage area she stopped and smiled again and said “I love to see satisfied customers” and that for sound effects I might wish to hear for myself. With that said she turned around, lowered her jeans and leaned over a desk. She said, “Remember, this is just business.”

She suggested that I try these to see how they sounded when being used. Well, how could I turn down such a generous offer! I tried the paddle and then the strap. The paddle had the better pop. She asked if I paddled my wife on the bare bottom as well. I admitted that yes that was frequently where things wound up. 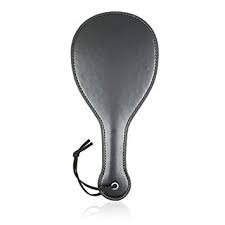 Kristin then lowered her panties just enough to reveal her beautiful bottom with a couple of fresh pink marks. I took this as an obvious invitation for further product testing and tried both items again. Both produced very acceptable reports on the bare skin and also created an increasing and pleasing red glow.

I thanked her for her assistance and concluded that either would be acceptable based on information gathered. I asked her if she had further thoughts or recommendations based on the ‘feel.’ She had by this time righted herself and straightened her clothing. She took me by the elbow turning me away from her. She reached around me and I felt her breasts pressing against my back. “What the heck was happening?” I thought. Before I had a chance to even ask what she was doing she had unfastened my belt and lowered my jeans. 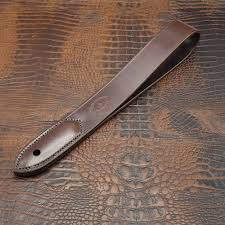 She administered a few with each, discussing the comparative nature of the paddle and the strap. She then lowered my boxers and repeated. By this time I was more than familiar with the feel of each and was trying to hide my growing interest! She smiled and said she felt confident we would be happy with either but understood it was hard to choose (what a salesperson!)

She asked “Well what’s it going to be?”

I replied, “I think we’ll take both.”

The sacrifices I make for my wife!

Meanwhile back home Dawn was in a foul mood. For weeks she had been hinting to Andy that she wanted a new spanking toy for her birthday. But he acted like he didn’t even hear her! Since her birthday was tomorrow she knew how Andy was spending his shopping time. Searching the aisles of Wal-Mart for yet another box of bath powder. No more! If he had no imagination she would buy for herself.

As she headed for the local adult store, sure enough she passed Andy, no doubt coming from Wal-Mart so wrapped up in his own dull shopping experience that he didn’t even see her pass. After a quick look through the window to be assured she recognized no one she marched into the store. It didn’t take her long to spot the items she liked: a beautiful leather paddle and a strap that looked liked it would feel delicious! She checked the price tags. Damn! Money was so tight these days. She couldn’t possible get them both, but how to decide?

A half hour later Dawn sat gingerly in the car, her heart still pounding. Kenny, the hot young salesman had helped her decide on both. But she didn’t feel guilty. She knew the new toys would spice up her and Andy’s love life. She also didn’t worry about the money. Kenny had offered her a job as a salesperson; he said she had just the personality and eagerness to learn that they were looking for. So she was going back to work.

Dawn sighed to herself and thought “The sacrifices I make for my husband!”

Nick hasn't written in years, but he's good. I'll have to start pestering him again. Meanwhile, I'll pester you all. Try writing a story for us and send it to elisspeaks@yahoo.com