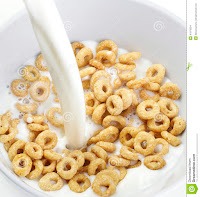 I like being here – the world seems to be spinning a little faster as December approaches. Blogging is something I still enjoy doing. Mostly I’m off topic, but no one really seems to mind. But on topic today a bottle of milk got me in trouble. We don’t use a ton of milk here. Mostly just for Nick’s cereal.  But we stopped and got a quart for that purpose Sunday after church. It was later that day when I realized I needed all that milk for a dessert I was making to take to school Monday – our groups turn to do Halloween food – I shorted my need just a bit and left him enough for cereal the next morning, promising to stop and get some on Monday.

When he asked me if I’d gotten the milk later that night I admitted I’d forgotten. I offered to go out and get it then but, Nick being the laid back sweetie that he is said no problem, he’d find something else for breakfast. I told him I’d be sure to get it Tuesday afternoon.

When I got home Tuesday he was here and asked, “Did you remember the milk?” Darn my memory! But I had done one thing he’s always fussing at me about – I’d remembered to fill up my car and I told him, “But I did remember to get gas.”

Gas does no go well over cereal I was informed. “Now wait,” I rounded on him. “Have you ever tried it?” It was then I was informed that the milk would go on my ‘list’. I’m not too worried, he rarely thinks of the list, but I thought it was very nice threat. And who know, he might even follow thorugh.
Posted by PK at 7:00 PM