Yes we're a day early this week and for a very good cause. Tomorrow begins Love our Lurkers Day and I really home everyone who reads Fantasy Friday will take the time to make the rounds.

Today's story is a re-run from one of my favorite authors of all time. I love her stories, I love her books - to be honest, I love her! This story is from our own Sunny Girl (Leigh Smith) and if you some great books to read head to her author page to check out Sunny's work.

They had been married for ten months when he spanked her for the first time. He had threatened many times before but had only swatted her butt a time or two. That first spanking was a doozy. She had gone on a trip with her friends after he told her it was too expensive and he didn’t want her going without him. She went anyway. Much to her surprise, he showed up and in front of her friends he put her over his knee and spanked the hell out of her. That was an eye opener. She never doubted his threats again.

It was twenty-three years later and they were having the same argument. She wanted to attend the Tri Delt (Delta Delta Delta) chapter reunion. Expense wasn’t an issue this time. She had recently overcome a health problem and Don didn’t want her to overtax herself until she was fully recovered. He was sure that once she got together with her “wacky” group of friends, all thoughts of well-being would fly right out of her head. She told him he could go with her and keep an eye on her. He said he did not want to go and he didn’t want her going either. He suggested she forego this trip and get together with her friends and their husbands at a mutually agreeable destination later in the year. She would be fully recovered by then and wouldn’t have to worry about any relapses.

Carolyn thought this was a good idea and suggested it to her group. They too thought it would be fun. Unfortunately, between work schedules, family issues and a location that was mutually acceptable to six other couples the idea was proving to be unrealistic.

Finally, Carolyn came to the conclusion it would just be easier to attend the high school reunion. She continued to try to get Don to agree. He remained steadfast. She finally gave in and told him he won. She would not attend.

She sulked and pouted for days and Don decided to surprise her with a quickie trip the weekend of the reunion. He booked a reservation at an oceanside hotel they loved. He was keeping it as a surprise. Don had to travel out of town on business the week of the surprise. He was due back on Thursday night and would tell her about the trip then. They could take a leisurely drive on Friday afternoon and spend the weekend relaxing on the beach.

On Wednesday the week of the reunion, Carolyn got a call from Rosie. She was together with Nancy and Jean and the rest of the group was due in later that evening. They called to see if maybe she had changed her mind and would be coming after all. They were all laughing and chatting in the background and she hated she would be missing all the excitement. She decided the hell with it – she was going to go. Don was being unreasonable. She would just not overdo.

She made a plane reservation, packed her bag and called a taxi to take her to the airport. She left Don a note, tacked it to the message board and off she went.

When she got to the hotel, she was unable to get a room because everything was booked. She dialed Rosie’s room and said she was downstairs but couldn’t get a room. Rosie said no problem she could stay with her. She gave her the room number and Carolyn went up and joined her friends. Nancy asked what made Don change his mind. Carolyn said he hadn’t, he was out of town and she just left him a note. Nancy shook her head and asked if she hadn’t remembered what happened the last time she pulled this stunt. Carolyn said she remembered but this was different. She left him a note and besides he wouldn’t do that again. Nancy said not to be so sure - he hadn’t mellowed that much in twenty-three years.

Carolyn and her friends went out to dinner and caught up on their lives since last they met. The next day was the first official day of the DDD convention. Carolyn was able to register and planned on attending some of the symposiums and was going to meet her friends for the fashion show luncheon. In one of the symposiums it was requested that people silence their cell phones. She looked for her phone and it wasn’t in her purse. She would have to look for it in the room later.

Carolyn didn’t think of it again until they were at dinner that evening when Rosie’s phone rang. Rosie didn’t answer but had it sent to voice mail. They finished dinner and visited the hotel piano bar and had a couple of cocktails before retiring. Once they got back to the room, Rosie checked her messages and there were three of them from Don. She wondered why Don was calling her instead of Carolyn. She asked Carolyn and Carolyn remembered she didn’t have her phone in her purse. She looked around the room and couldn’t find it. Oh my God, I can’t find my phone. Don must have been trying to call me. He must be frantic. She went into the bedroom and placed a call to Don. He picked up on the first ring.

“Are you alright? Where are you? Asked Don all concerned. Your phone is here on the counter, the car is in the garage.

Carolyn responded she was fine. She apologized because she hadn’t realized she didn’t have her phone.

“Didn’t you see my note on the Message Board?” She asked.

“There is no note on the message board” responded Don.

“Oh, so you completely disregarded me and went to the convention even after I said I didn’t want you to go.”

“Oh, Don. I didn’t plan on it but Rosie called Wednesday night and I just couldn’t stand not being there.” Don’t be angry with me. I promise I won’t overdo.”

Don was so quiet; Carolyn thought the connection had been severed. She asked if he was still there. His voice was deadly calm and quiet.

“Yes, I am still here. I can’t talk to you right now because I am so angry with you. I’m glad you’re alright.” He hung up. 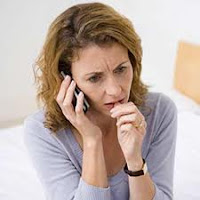 She tried calling back and the call went to voicemail. Carolyn was really worried now. She knew she was in big trouble. Maybe she should see if she could get a plane ride out early tomorrow morning. She decided to try to sleep and make a decision in the morning. She took her nightly meds and slipped into bed. She tossed and turned for what seemed like hours. She didn’t feel well so she got up and tried to read. She continued to feel ill. She was very nauseous and feeling very clammy. She was scared. She woke Rosie and asked her to take her to the Emergency Room.

When they got to the ER, they ran a series of tests and everything seemed normal. They asked her what meds she had taken. It was determined that her meds combined with cocktails at dinner and the tension caused by her conversation with Don had caused a stress attack. They suggested she reduce her tension and stay away from alcohol while taking her current medications.

She felt so foolish. Rosie took her back to the hotel and Carolyn said she was so glad Don would not know about this. Little did she know the hospital insurance office would call Don to verify a problem with his member number?

Carolyn decided to go home early. Maybe it would mollify Don if she came home before the end of the convention. She was able to catch a flight that got her in early afternoon. She took a taxi home. Don wasn’t home when she got there. Oh good. She would make him a nice dinner and hope for the best.

Don got home about forty-five minutes later. He walked in the door and saw her in the kitchen. He

grabbed her by the arm, hugged and kissed her and then went to the kitchen drawer and removed the spatula. He bent her over the counter, pulled down her jeans and blistered her behind. She was howling for him to stop but he just kept spanking her.

“How did you know about the hospital? She quietly asked.

He told her the insurance company needed a verification of their number. Then he called Rosie and got the rest of the story.

“Don’t be angry with Rosie,” he said. “I was going to come get you but she told me you were already on your way home and you were fine and I could get the rest of the details from you. But I gather from your response you weren’t going to tell me that little detail.”

He said he hoped she had enjoyed her little escapade because it cost her a weekend at The Tradewinds. He told her about the plans he had made for their little getaway. She said they could still go.

“Not a chance” he said. Besides, I am not sure you’ve been spanked enough. Your bottom may be too sore to sit comfortably for a car ride.

Just then the phone rang. Don picked it up. It was Rosie checking on Carolyn. He handed the phone to Carolyn and she told her friend she was fine if you didn’t count that her bum was about the color of her name and she might be headed for more.

Don laughed and kissed the top of her head.

Thanks Sunnygirl!  I love your stories, you know that.  Thank you for all your Monday stories. Now for the rest of you reading out there. if you have one to share, please send it to elisspeaks@yahoo.com
Posted by PK at 5:30 PM