Today is a special day for many reason. First we are celebrating Nick’s dad’s ninety-fifth birthday! His parents ages gives me great hope that I’m going to have Nick for a long time. His actual birthday is later in the week, but most of the family can get together today.

Today is special for another reason. Nick and I are celebrating our thirty-third wedding anniversary! We went out with friends to help us celebrate last night. We went to a restaurant about an hour from here and has just about the best food you can find anywhere. This was my meal and I never had to pick up my knife. Best prime rib EVER! 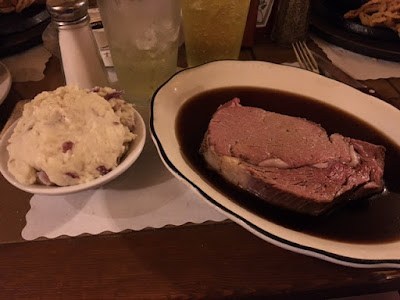 Our marriage has always been extremely solid, but the last ten years have been especially wonderful. That was when TTWD came into our world. Sometimes we’ve gone at it hot and heavy, other times it seems to fade away for a time. But Nick asked an interesting questions the other day. He asked me what were some things I would do to provoke a spanking. As he put it, “I’m pretty laid back and you’re pretty well behaved. What would you do to lead me to spank you?” Good question and I didn’t really know the answer. I thought it was hot that he even mentioned how I ‘behaved’ it’s just not a word he uses often and it really caught my attention.

After thinking I told him I sometimes make really smart-ass comments – not hateful, more funny and he takes them that way, but I guess sometimes it’s a plea for a little HOH attention. Then he asked, “What about not putting down your weight each Friday like we agreed on?” I had to remind him we’d changed it to Saturday and he just nodded.

Yesterday morning, I got up, weighed and recorded it. Saturday afternoon Nick said, “We need to talk.” Okay… He went on, “When I asked what you’d do to provoke a spanking I wasn’t planning on lying being one of those things.”

Lying? “What did I lie about?”

“Did you weigh and record it this morning?”

“You want to take a look at that again?” he asked. Good grief, I’d recorded that I'd lost twenty-seven pounds since last week!! It was a silly mistake and I knew exactly the mix up in my head the caused me to put down the wrong numbers.

Quickly I told him, “Sorry honey, you know that’s crazy, it was just a silly mistake.”

He was smugly shaking his head, “Nope, I see it as lying and once Mollie leaves Sunday afternoon, I’m going to take care of that.”

So… it appears that is how we’ll be celebrating our anniversary this afternoon. Hope you have a nice afternoon too.
Posted by PK at 7:30 PM