It's been a long week here.  I'm so happy we've arrived at Friday again! Even better than that we have another brand new Fantasy Friday story. This story come to us from a fairly new blogger. I ask her to share a little with us about herself -

My name is Adrienne Cecil, wife to my wonderful hubby, Jeremiah. We have been married six years and have two preschoolers. We live in the deep south where we are already sweating this time of year.

We are quite new to the DD/Ds/spanking thing. I stumbled across the DD lifestyle kind of by accident a couple months ago and, while reading the blogs, realized that such a lifestyle is something I'd wanted for most of my adult life. I presented the idea to Jeremiah, and he agreed to try spanking and D/s but is more hesitant about DD. I started a blog to be a type of diary for me in our new journey: Classical Marriage in a ModernWorld.

Lilly swept through the kitchen, grabbing pans and ingredients.  I am so late!  Dinner should have been on the table an hour ago, but Josiah’s doctor’s appointment had gone long, and on the way home, the highway had been a parking lot.  Apparently, a tractor trailer had somehow spewed its load of logs all over the road.  She had sat in traffic for nearly an hour before being redirected to a detour utterly unfamiliar to her. Blast it.  Why does the only pediatric nephrologist in the area have to be 50 miles away? At least she had her GPS unit, but by mile twenty-five, Josiah, Isaiah, and Emily had exhausted all the snacks she had brought and were hungry, tired, and irritable by the time she pulled the minivan into their garage.


As she banged and clanged the pans all over the kitchen, she continued her pity party in her head.  As if all that were not enough, now her boys were fighting over some stupid toy.  “Isaiah! Don’t hit your brother!” She snarled.

Annoyed, she became aware of a tugging on her shirt; four-year-old Emily was always underfoot when Mama was in the kitchen.  Grr.  “What, Emily?” she demanded sharply. Suddenly, Lilly and the little girl were startled by a piercing shriek.  The smoke detector.  I swear I’m going to rip that stupid thing off of the wall. Oh! Oh! My oil is on fire in the pan!
As the contraption continued to wail, Emily put her hands over her ears and tried to bury her head in her mother’s leg.  Lilly grabbed for the lid to the skillet but nearly tripped over her daughter.  “Move Emily!” Lilly screeched impatiently, pushing the little girl away from her leg and grabbing the lid for the skillet, “Get out of here, now.”  When Emily did not move quickly enough, Lilly snapped at her, “Emily! Now!”  Emily ran from the room, tears streaming down her silken cheeks.

Oh! That screeching noise is going to make me crazy.  I’ve got to shut that thing off.  Lilly turned to reset the offending smoke detector, but she realized that the fire still flamed in the pan.

From behind she felt the pan lid being pulled away from her.  She yanked the lid back and whirled on the interloper, “Emily!” she yelled, “I told you to . . .”  Instead of her daughter, her husband stood behind her.  He gave Lilly a look and took the lid from her hand.  Gulp.  Within seconds, Eric had set the lid on the pan to squelch the flames, shut off the burner, turned on the vent hood fan, and reset the smoke detector, all without a word.  The expression on his face was inscrutable.  Lilly felt her anger and frustration giving way to guilt.  She tried to hang on to the anger, using it as a protective shield, but to no avail.

As Eric led the kids upstairs, settling them in front of an episode of Barney, Lilly continued to stand in exactly the same spot she had when Eric had materialized behind her.  She could not bring herself to move.  She saw the scene of the past ten minutes replaying in her mind’s eye and realized how out of control she had been.  Tears of regret welled in her eyes, and she wanted to crumple to the floor and sob.  Why, oh why, do I let that temper get the best of me every single time?

Returning to the kitchen, Eric took her arm and led her toward their bedroom.  Lilly panicked.  “Eric, I . . .”  He looked at her with a raised eyebrow.  During punishment, she was required to call him Sir.  “I mean, Sir, I’m sorry.  I have just had a really frustrating afternoon.  I didn’t mean to scream at the kids.  Please, Sir, I will be more careful.”

As they reached the bedroom door, Lilly began to pull her arm away, but Eric’s grip tightened.  “Lilly,” he warned.

“The kids are upstairs alone,” she tried.

“The kids will be fine for a few minutes.”

Eric cut her off with a glare. “To submit,” he finished for her.

Lilly sighed but obeyed.  She knew that resisting would only make her punishment worse.  Eric closed the door behind them and turned on their television, turning the volume way up.  Oh, no.

Eric moved to a straight-backed chair and motioned for Lilly to join him.  “Come here, Lilly.”

Trembling, she moved to stand before her Sir.  “Why are you about to be punished?”

Ugh! I wish he would just lecture me.  I hate these questions. “I yelled at the kids.”

Lilly did not want to admit to the loss of control of her ever-present temper.  “I burned dinner?” She said hopefully.

Her Sir was not amused.  “Why are you being punished, Lilly?”  He repeated pointedly.

Lilly looked at her feet.  Although she knew that she had done wrong, admitting it seemed so difficult.  “My temper.”

Lilly knew what he meant.  Her answer had skated around admitting wrongdoing.  He wanted a confession.  She sighed, and her shoulders sagged.  Gathering her courage, she said, “I was frustrated and angry.  I lost my temper and took out my frustrations on the kids.”

“We have talked about your temper, Lilly.  Raising your voice in anger to the children or anyone else is unacceptable behavior.”  Eric said.  When she stole a glance at his face, Lilly noted that his expression, like his voice, was calm but unmistakably disapproving.

“Yes, Sir.”  Again she felt the urge to crumple to the floor in a sobbing heap.  She had hurt her sweet little Emily’s feelings and had disappointed her beloved husband.  I wish I could do better.  I hate hurting my family. Crap.  I deserve to have my rear set on fire.  Just the thought made her shudder.

“You’ve asked me to keep you accountable about that temper, and I promised that I would.”  Eric paused.  Lilly realized that she was holding her breath.  Finally, he said, “Go get my paddle and come kneel.”

A shiver went through Lilly’s gut.  Her “yes, sir” was barely audible.  The paddle?  I can’t handle more than a few swats with that wicked thing.  The two times that Sir had used the paddle, she had been unable to keep still and had even reached back on one occasion.  At least a paddling tends to be done far more quickly than a hand spanking.  Slowly, Lilly moved to the closet and stretched up to the shelf above her, wrapping her hand around the thick, wooden implement.  She pulled it down and walked hesitantly back across the room.  She noticed that he had opened his legs to have her kneel between them.

It took a heartbeat for realization to dawn: He’s going to hold me down!  Her breathing became ragged, and she wanted to run the other way.  Her mind began a pep talk.  I was the one who wanted this life.  I asked him to punish me harshly for my temper.  Somehow, remembering those things did not make her feel any better.  She forced one foot in front of the other until she stood again at Sir’s knee.  She willed her arm to move forward to hand her Sir the instrument of her punishment.  Taking the paddle, he waited expectantly.  Closing her eyes, Lilly heaved a sigh and sank to her knees between his legs.

“Eric,” she whimpered, “I’m scared.” She looked at him with tears already tracking down her face.
Eric did not correct her break in protocol.  Instead, he kissed her head.  “I know,” he said gently.  He reached down to the waistband of her jeans and began to tug both them and her panties down around her thighs.  Lilly shuddered and put her hands over her face, crying harder.  As he guided her over his left knee and closed his right leg over her legs, he said, “But you know you can always trust me.”
Lilly sniffed and moved her hands to the floor in front of her.  “Yes, Sir. I know.” 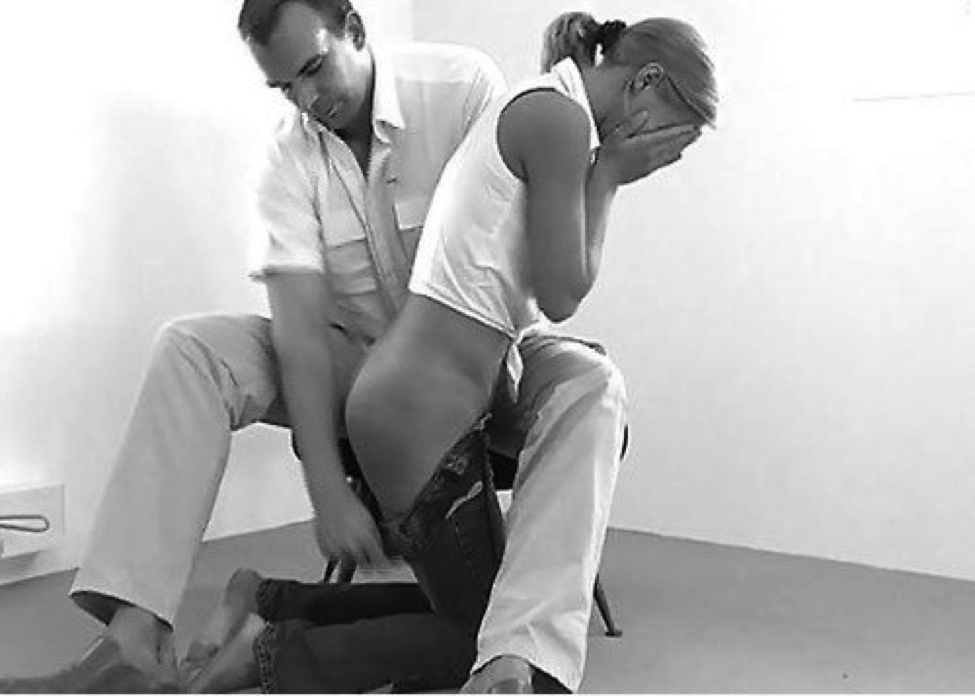 Adrienne, this is a wonderful story! Thank you so much, you can write for us anytime!
I sure hope there are others out there writing too. Please send your stories to elisspeaks@yahoo.com