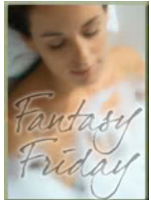 We have an excellent story this week. The story comes from Purple Angel a blogger from a long time ago. And as you'll see, an excellent writer. The story is in three parts so I'm put one up today, tomorrow and Sunday. Please enjoy...

Come back tomorrow for the next part of the story.
Here are parts two and three.
Posted by PK at 9:00 PM