It's Friday and it's freezing - I think its safe to say that for most of my readers.  I'm hoping I won't have to leave the house all weekend, but that rarely happens. But we do have a story to warm us up - and as promised, it's a brand new story. And it's from a friend of our - Jan, from an English Rose. Jan has done a wonderful job, but i know everyone is a bit nervous sending in their first story.  I have no doubt you will love it as much as I did!


Damn and Blast it! How could my day be starting like this? Half naked (bottom half naturally) and facing the empty corner in our bedroom whilst awaiting my husband's attentions. By attentions I imagine you can all guess just what form those might come in, especially as he has and I quote, "been pushed to his limits with my idiotic behavior."  Really! How rude. I never do anything without my own good intentions and to find myself once more in this predicament is rather galling.
My husband is generally speaking a forgiving, placid sort of chap but sometimes he seems to me to have a very short fuse. Oh who am I kidding he has an extremely long fuse and I had accidentally just blown it. I do seem to have a knack for doing just this.
Married for many years and with the children grown we had decided as many do to spice up our life. With the advent of a certain book and hefty amount of fantasizing we introduced spanking to our love life. Wonderful, I hear you cry, Jolly good idea, you say. Well...
On the whole I have to agree, Nothing gets either of us going so much as an erotic, good girl spanking, lots of stroking, lots of fairly gentle wallops and a nice set of rosy cheeks all lead to a great time. However as time went on aforementioned husband realized that this lovely activity could also be used in much more useful way!
I am afraid I do have a few, shall we say bad habits, just little idiosyncrasies, that are harmful to few I come across but annoying to the one important man in my life.
My current situation has come about because of speed, more accurately my extremely fast speed in the 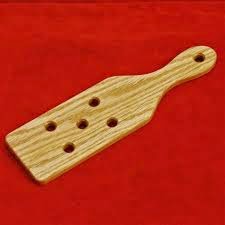 "Come back to me and we will finish this now," I turned to him and could see the pillows piled at the end of the bed and two implements lying beside them. My least two favourite implements, really hard leather paddle and an even harder wooden paddle that I hated. I started to cry again but if I am truly honest I wouldn't have wanted him to let me off, my guilt now was overwhelming and I practically threw myself into position.
"In a hurry sweet cheeks," he chuckled. Knowing me so well though he knew exactly how I was feeling. "Let's sort these last two offences out then, I am going to use this leather paddle now and when you next think about spending enough money to feed a third world country on a dress maybe you will think again. Also will you please remember that I love you not the damn woman from number 23! If I didn't love you I wouldn't be here now doing this would I?"   He then said. "Ten with this paddle, you don't have to count it will take all morning to get through them if I have to wait for you." Bringing the paddle down as he finished his sentence I immediately began shrieking and begging him to stop. Have I mentioned how much I dislike this paddle?
To give him his due he didn't delay and it was over in a very short time leaving my bottom hot, throbbing and as sore as hell and me wishing for two things, one, that I had never bought the dress, and two, that I had never met the woman from number 23!
"I hope you are regretting the speeding and the shopping right now but babe for me all this pales into insignificance besides the lying. I would never lie to you and I expect the same respect from you.  Do. Not. Lie.To. Me. Ever. Understand?"
"I won't , I won't. I’m so sorry sir. Please , please, I am sorry. Sorry. Sir, " I was babbling by now and aware that Tom was holding the dreaded wooden paddle ready to begin.
"Last ten, I'll be quick, and you will never lie to me again."
With that the paddle slammed down into my backside, alternate cheeks ten times. I howled from the start and by the end I couldn't do anything but lay limply trying to catch my breath.  This was the worst spanking he had ever given me and I knew that I had deserved every bit of it.
As soon as he had finished the paddle hit the floor and he hauled me into his arms for some very needed cuddling. Lying on the bed beside each other (me on my tummy) I stammered out my apologies over and over as he murmured forgiveness."Gosh darling," he chuckled as he very gently applied aloe lotion to my scorched bottom, "your cheeks are as red as that new dress!" If you are a very good girl today I may take you out to dinner tomorrow, got to get my money's worth out of that new dress and you do look ravishing in it!"

Jan I really appreciate you not only writing this story, but for sharing it with us as a Fantasy Friday. I don't get many new stories and I was so happy to get this. You really did do a great job and I really, really hope you'll keep writing. Jan had the courage to jump in and try it - won't you think about it? Send your stories to elisspeaks@yahoo.com