We've made it to another Friday. I went way, way back to to find today's Fantasy Friday. This was first posted in 2007 and the writer is an old friend of mine by the name of Scout. I haven't heard from Scout in several year, but perhaps she is still out there. Whatever she is doing, I hope she is still writing. I really liked this story. I hope you enjoy...

Jan and Ted Coles sat in separate wingback chairs, across the desk from Dr. Baird Winslow. They were nervous as they watched the bespectacled psychologist, a noted marriage counselor and therapist, shuffle his notes. Ted glanced at his wife, whose gaze was in her lap. He reached over the arms of the chairs, and picked up her hand. He smiled at her as he gave her a reassuring squeeze.
Dr. Winslow smiled, too, as he looked up at them. “There’s very good news for you,” he began, “the tests, questionnaires, surveys and interviews all indicate that you will be just fine – better than you ever believed, in fact.”
Jan and Ted exhaled.

The doctor continued, “You are, as individuals, well grounded, robust and resilient people. You both can be characterized as practical and hard working. You have a genuine affection, admiration and deep love for the other. You are going to be just fine.”
There was a pause, and finally Ted spoke. “I’m – we’re – relieved to hear that, Dr. Winslow. We don’t doubt that we love each other, as we told you a month ago when we came here. But there’s no denying we’ve had problems over the last few years. We’re not intimate like we used to be – and I don’t just mean sexually. We’ve been going through the motions, but we haven’t shared life as a couple in a long while.”
Jan spoke up, too. “Is it unrealistic to expect it to be as close as it was in the beginning? Do all married couples lose intensity in their relationship over time? I mean, we’ve had kids, and jobs, and stress over the years. Is the problem that we’re not adjusting to something that happens inevitably?” She looked distressed.
Dr. Winslow looked at her steadily, and then spoke. “There is no inevitable anything in marriage,” he said. “Mrs. Coles, come with me. I’m going to show you something that is going to change your marriage forever, and will restore all intensity and emotional connection that you’ve been missing.”
The doctor rose and Jan followed his lead. They walked together to a small table against the far wall. It was covered with a white cloth, but there were obviously objects underneath the covering. The doctor lifted the cloth by its hem and withdrew it with a flourish, exposing a small collection of paddles and straps. Jan Coles gasped, and immediately colored. Dr. Winslow could see her neck, face and ears blushing red, and he nodded to himself. Ted Coles, still seated in his chair, couldn’t see what his wife beheld, but was curious to know what provoked her reaction.
Dr. Winslow spoke, in a firm voice: “Mrs. Coles, you will take this – “he handed her a small, oval- 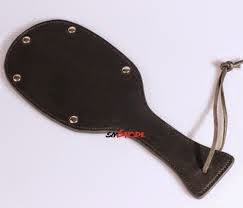 “You’re going to meet your responsibilities to me and to our family,” he continued, “and you’re going to lose the short temper and snippy attitude you’ve been copping.” Ted paddled some more, and Jan squirmed and twisted and kicked her heels. Her bottom stung like fury, and the blows that landed on the sides of her buttocks and the tops of her thighs caused her particular distress. “Yes, Ted,” she agreed, “I will. Please stop for a minute – can I get my breath? It’s really hurting!”
“I do believe it’s supposed to hurt,” Ted answered her. “I’m almost finished here, but know this – I will not hesitate (three particularly hard spanks landed as he spoke these words) to spank you from now on if I feel you’ve earned it. Understood?”
“Yes! Please stop!”
“Yes, sir, you mean?” Ted delivered another round of hard, rapid spanks.
“Yes, sir! I understand!”
To Jan’s relief the spanking stopped. She felt her husband’s gentle touch again; he lightly ran his fingers over her reddened bottom, and then rubbed more firmly. He rubbed her back with his left hand. Jan, though she was still bare-bottomed across her husband’s lap, in a doctor’s office, felt calm and also incredibly aroused. She thrust her pelvis into Ted’s thigh and rubbed against the fabric of his suit trousers. She waited to hear from him that she was permitted to get up and restore order to her clothing.
Ted looked into her eyes. “My bride has another wifely duty to conduct at home,” he said with a wry smile. He put her hand on the front of his pants, and she smiled at the stiffness she encountered there. They scurried from the doctor’s office like newlyweds bound for the honeymoon suite.


~o~
I told you she wrote a good story. Scout, if you are still reading I hope you'll check in. I will tell everyone that Fantasy Friday is in jeopardy. I'm not getting any new stories, so I don't know what to do. I always want everyone who reads here to know we would love it if you would just try one story. It  can be long, short - just try one. Please. You can send stories to elisspeaks@yahoo.com