It seems that there are a great many teachers among us out here – either actively teaching or retired. I’m not sure why, but I find it interesting. Anyway I have no doubt everyone will be able to appreciate the terrifying experience I went through at school not long ago.

We’re studying India at the moment. I teach ancient civilizations from all over the world. I’d been searching our school library for a decent video, basically something that wouldn’t put the kids to sleep within the first fifteen minutes. I found one that was pretty good, about an hour long and combined the ancient information with a little about Gandhi and how cows still wander in the street. I only showed about fifteen to twenty minutes at the time to keep them interested.

Suddenly, on the big screen, carved in stone no less – was every conceivable sex act known to man. There were carvings of men going down on women, women going down on men, women straddling men as they sat, anal sex… picture the Kama Sutra illustrated in stone. And there I sat with a roomful of eleven and twelve year olds. I’ve been teaching for nearly thirty years but this situation was new to me. I did know one thing however and that was to call NO attention to what we were watching. If I’d have grabbed the remote and turned it off it would have confirmed that what they were seeing was completely inappropriate. So I continued to stare at the screen with a blank to somewhat bored expression, as my heart pounded out of my chest. 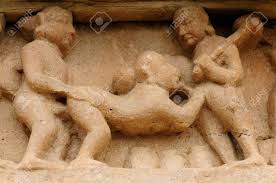 (Examples of what was in the video)

Thankfully this was my least mature class. As it suddenly began dawning on a few of them what they might be seeing, just as they began looking around to one another and then back to me – with my bored, uninterested expression – the video gratefully moved on to other topics. And I let the video continue to run until it was time to go to our lockers, which thankfully seems to wipe anything that’s happened in class from their minds anyway.

Believe it or not I got not one question or comment from student or parents. It’s a miracle, truly. If I plan to show anything from the computer – youtube or anything I always preview it, but this was from the school library!

And now comes the true question – do I tell my colleagues or let them discover it on their own?  The good side of me says tell and label it with a sticky telling teachers where to stop. My rebel side says to hand it to the other social studies teacher, who always says rude hateful things about gay people even thought she knows LJ is gay and is extremely embarrassed by anything sexual and just let her show it. I won’t do that, but picturing what would happen has been fun.
Posted by PK at 5:30 PM